ANOTHER VICTORY IN PARIS 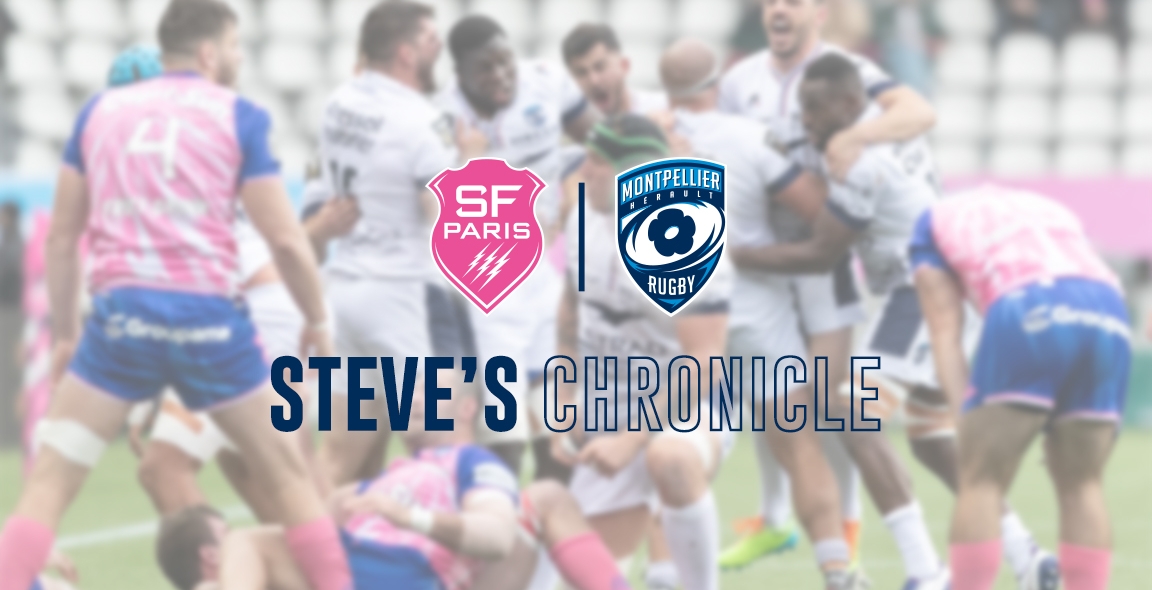 After the remarkable victory in Paris a couple of weeks ago v Racing, Montpellier were again in the Capital this time Stade Francais, team who blow hot and cold but are always difficult when they are at home. Over the years Montpellier have not had an enormous amount of success in Paris v Stade, so just maybe this could be something different?

With many players injured or on Autumn International duty Montpellier did not have the greatest of choices and the half back pairing of Louis Foursans and Martin Doan was as young as it gets with little experience of today’s Top 14.

The first on the scoreboard was a penalty for Montpellier with Louis Foursans doing the honours; he may be young but has a solid head on his shoulders 0-3 to the visitors.

It was not long before Stade returned the situation with a first try of the game in the 11th min. Chapuis going over in the corner, the extras were added by Segonds and Stade had their noses in front 7-3. Although the attacks were coming from Stade Francais Montpellier had to do a lot of defending and they were getting caught on the outside more often than not. Tomas Darmon hit a monster penalty from the half way line to bring Montpellier to just one pt. behind the Parisiens, 7-6, he tried again mins. later but this time was well short with his efforts, what was helping Montpellier was the indiscipline of the opposition, giving Louis Foursans another opportunity in the 28th min to take a slender lead, 7-9, but that lead was short lived with Segonds hitting a penalty of his own and again the lead changed hands 10-9 to Stade. Just before the break Glover went over for the Parisiens but the extras were missed, another penalty for Montpellier brought the half time score to 15-12, Montpellier had survived the onslaught from Stade and all was to play for in the second half, and just maybe another victory in Paris.

The second half got under way and it was Stade who moved the scoreboard forward with a try from Etien who was giving Montpellier allsorts of problems every time he had the ball in hand, the extras were added and Stade moved their score onto 22-12 with the bonus pt. in their pockets.

Louis Foursans added another penalty for Montpellier to reduce the score, as long as Stade kept infringing, Foursans was there to knock over the points when in range. 22-15. Once again another foul and the young Foursans took advantage and added three more pts to his total and Montpellier was only four pts behind 22-18.

Again Etien was uncontrollable on his wing after good play from the forwards, the ball went through several hands before the winger touched down in the hallowed ground, the extras were missed but Stade secured their bonus pt. with a 4 tries to zero, things started to look not to rosy for Montpellier.

The game continued at a fair pace and the ref bought out the yellow card for Gabrillagues on their 5mts. line Anthony Bouthier added the penalty and Montpellier were still in touch 27-21, with only 14 on the park it was now time for Montpellier to take advantage on the superior numbers.

Montpellier attacked from their own half and the finally it was Tisseron who went over for their first try of the game, the extras were added and Montpellier had sneaked a 27-28 lead with just 10 mins. remaining. Anthony Bouthier added a superb drop goal just at the right moment to give them a 4pts lead and just 8mins to defend like lions and take their second victory in Paris in 3 weeks.

Montpellier did keep their lines clean for the rest of the game and when the ref blew for full time the slender 4pts lead was intact, and also the 4pts victory also in the pocket. Stade had the reward of both defensive and attacking bonus points with a 4 tries to one total a sight not often seen in the TOP 14.

This victory sees Montpellier climb into 3rd place in the Championship, an excellent result for the boys, but thanks have to be given to Stade Francais, for their enormous penalty count with Louis Foursans and Anthony Bouthier knocking over 7 between them plus a drop and a conversion, which is 26 pts. from the boot, Christmas coming early for Montpellier.

Holidays are on the horizon for most bar our Internationals, the next game is at the end of the month v the old enemy Castres at home, win this one and the boys will consolidate their place in the top 3 of this seasons Championship.

Defence needs to be looked at on the outside as 4 tries scored by Stade did come from defensive errors but a win is a win and it still counts, 2 visits to the Capital and the boys come away with 8pts not too shabby at all!!!