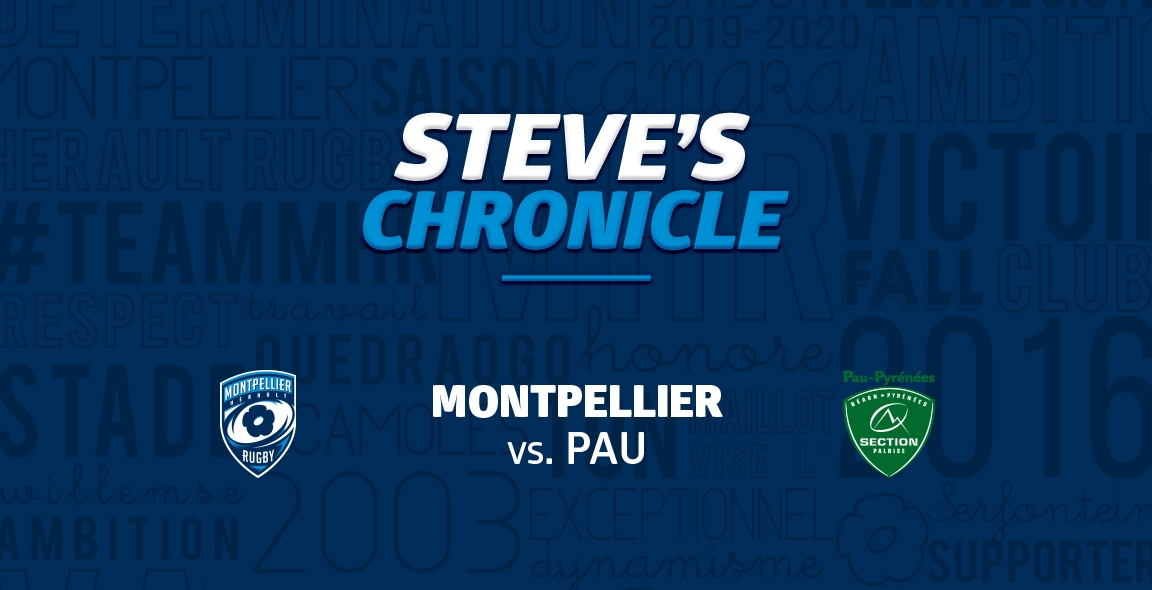 First home game of the season and the visitors were Pau, a team that is trying very hard to establish themselves amongst the hierarchy of the TOP 14. Never an easy task these days as the competition seems to be harder every new season and as we all know it lasts 10 months with many battles on the way to that all important final in Paris in June. The KO was 18.00 and the weather, hot and humid, on the park all the players will suffer with this exceptional hot, sultry weather which is gracing Montpellier and the south of France at the moment.

The game got under way with a smallish crowd of around 6,825 but maybe there are still plenty of supporters enjoying their summer vacations and hopefully the crowds will increase as Montpellier start adding a few victories to their cause. The team had a good mix of experience and youngsters who are all trying to take their chances while the World Cup players are absent as well as an infirmary which is fairly full, to say this is only the second game of the season. Montpellier started with their new style Xavier Garbajosa running rugby, off loads as much as possible and some very fast open rugby was being seen by all, with the humidity the ball was nowhere near dry and there were several handling faults and some shabby passing, but with the conditions as they were it was expected.

First on the score board was Montpellier, some neat passing and Cruden gave Delhommel the perfect pass to go over, the extras were added by Cruden and Montpellier 7-0 to the good, mins. later Cruden added another penalty to move the score onto 10-0. Hastoy got the Pau scoreboard moving forward with a penalty after Jaques du Plessis had infringed 10-3, water break after 20mins which was well needed; it was very hot and humid on the park. Next score again was Montpellier from a ruck 5mts out Daubagna tries to clear the ball and failed. It came to Nadolo and from 5 mts out, even Samson, Golaith or any other gentle giant was going to stop him and over he went, Cruden added the extras and a good break had been created 17-3. The 26th mins. and a small disaster, Delhommel hit a tackle with the leading shoulder near the neck and face area, and after repeated videos the ref pulled out the red card. The fault was there but it was probably more accidental than brutal but with the consigns today the ref had little choice and Montpellier were down to 14 for the rest of the game approx, 54mins. Obviously this gave new courage to Pau, and after a scrum just short of the line the ball came out to Fumat and he went over, the conversion was missed by Hastoy 17-8 and Pau was back in the game. Montpellier had to work hard in defence with a Nadolo and Vincent hitting the opposition hard, the ball came loose for new signing Caleb Timu to gather and to go over from short range, extras added by Cruden and Montpellier were 24-8 ahead with a clear margin and one more try for a bonus point win. Finally the ref blew for the break with Montpellier playing a very confident open game but with 14 on the park they would have to work hard for the result they needed for this first home game of the season.

The second half started with a bang Anthony Bouthier made a break from his full back post, served Captain Kelian, who then in turn gave the ball back to Bouthier who went over in the corner. This player from Vannes looks very confident at No. 15 and will be a great asset for the team ! Cruden added the extras with a superb kick from the touch line : 31-8 for Montpellier. Exactly one minute later a massive tackle by the Montpellier defence Hastoy looses the ball and Cruden hacks on, the young Reilhac chased and tapped the ball over the line to score 36-8, Cruden had his first miss of the evening, but the bonus point was secure. Pau managed to reduce the score with a try, from ex Montpellierin Presenti, which was converted by Hastoy, 36-15 and that magic bonus point was still intact. Pau then scored again this time it was Marchois and again Hastoy converted 36-22.but that saw the bonus point fly out of the window. Pau were given 2 yellows one after the other after a series of infringements first Adriaanse then Tagitagivalu so the advantage was for Montpellier 14v13 on the park. Just 10mins to go and Montpellier needed another try for the bonus point the game already won so they attacked relentlessly, Bouthier served Gaby Ngambede who shot off like a cannon he left 2 defenders for dead before drawing the last defender, a perfect pass to Benjy Fall and Holy Moly the bonus point regained, extras added by Bouthier 43-22 and off went the siren for the end of the game !

Congratulations all round, Xavier Garbajosa and his staff happy bunnies, (we all know coaches are never that happy but...) first win at home with the 5pts. The team played as a team with everyone working for each other and 6 different try scores which proves the case. Negative point was the serious injury to the young Daniel Brennan who looks like it could be a while before we see him again on the team sheet, latest news was an ankle and ligament problem which will be a long time in healing, and hopefully he can get back to fitness as soon as possible. Final score Montpellier 43 - Pau 22.

Everyone played their part but Aaron Cruden, Gaby Ngandebe, Caleb Timu, and the two young centres Vincent and Reilhac showed again much promise all led by Capt Kelien Galletier whose decision making was excellent while also leading from the front. Next week we are again at home, v La Rochelle KO. 20.45 Sat evening, another tough game but I think these days you can just about say that for every game home or away this season.