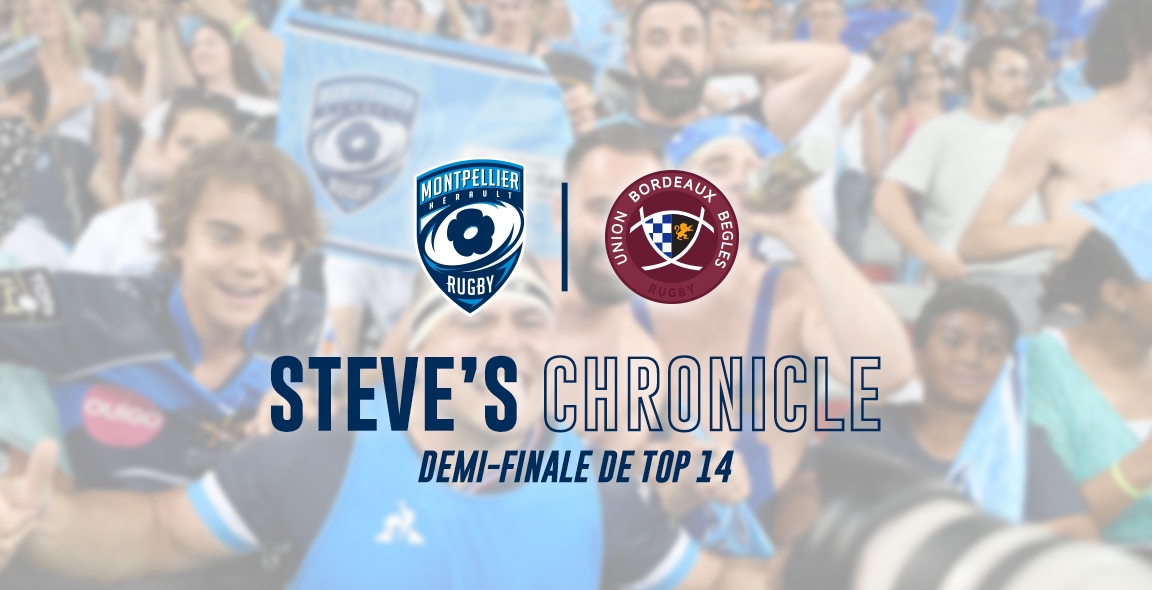 Saturday evening in Nice, temperature far to hot, humidity far to high, but the boys were there to take on Bordeaux for a place in next Friday night’s Final v Castres who had beaten Toulouse the previous evening at the same Stadium.

Beaten twice in the TOP14 this season by Bordeaux who were the firm favourites and not many Journo gave Montpellier a chance but 80mins can change absolutely the world of predictions.

The danger in this match was the 9,10 Lucu and Jalibert who have been giving super service this season for Bordeaux, stop these two Petits Diables and Montpellier could raise their chance of victory, but all must play the game of their lives.

The match got underway, Jalibert for Bordeaux started the battle and a battle it was going to be both defences were very strong, but who would come out the winner, if you are a gambling man you would not be placing large amounts of cash on this battle.

The tackling was ferocious from both teams brick walls were set up on both 22’s and the signs “do not cross” in place, but it was Bordeaux first on the mark with a Jalibert penalty 0-3. Montpellier replied within minutes after great work from the forwards, the ball came out to Vincent Rattez  who plunged over in the corner, Little Big Man Benoit Paillaugue hit the perfect conversion kick 7-3 to Montpellier, the supporters showed their voices and for once they out numbered their opposition.

Montpellier added a drop goal from Paolo Garbisi to extend the lead to 10-3, but again Bordeaux were not going to lie down and die, after a turnover in favour of Bordeaux, Jalibert tapped ahead and managed to get over the line, for once the Montpellier defence was caught sleeping, conversion added and the scores were equal 10-10.

Both teams continued to batter each other and although their were some close moments the try lines stayed intact, this was almost trench warfare and nobody was giving an inch, this was excellent rugby for the purist but if you had come to watch fast running try scoring rugby it was never going to happen. On the stroke of half time Montpellier got themselves in position for a drop goal and Anthony Bouthier obliged giving Montpellier that most important, moral boosting 3pts lead as the players left for a well deserved break, 40mins left to play and it was still anyone’s game, 13-10 advantage Montpellier with plenty left to play for.

Second half started and it was much the same, plenty of metre gaining kicks and stone wall defences if someone was going to score another try it could come from a big mistake or an interception as  both teams were playing with absolute caution as one mistake could leave the team on holiday while the winner goes to Paris.

The bench started to come into play and Benoit Paillaugue was swapped for Gela Aprasidze, was this going to be Benoit’s last or second last game for Montpellier before his depart to Toulon next season, still 15mins left to play it was anyone’s guess.

Exactly 10mins. left to play and Montpellier have a penalty 55mts out in their own half, “give me the ball” screams Gela the monster boot, rarely seen in the elite rugby, this pocket size demi got his tee placed the ball and smacked it over the crossbar with many metres to spare, 16-10 to the boys with  mins. left to play on the clock.

A converted try would give Bordeaux a one pt. lead so defence, defence was the name of the game, this the boys did superbly, shutting out all the attacks possible, from an angry Bordeaux and after 79 mins an ugly tackle on Becognee, the ref went to the video and awarded the penalty, this was further than Gela’s last one. “Give me the ball” he screamed again, everyone in the stadium thought this was a “BRIDGE TOO FAR” but Gela monster boot thought all was possible.

He placed the ball and boom of it went not far off 60mts away the ball soared threw the damp evening and past over the cross bar with room to spare, 19-10 and Montpellier were in the final, Bordeaux had to score twice to win and they had scored zero pts so far in the last 40mins.

Finally the ref blew for full time and Paradise was Montpellier’s for the next 5 days.

Montpellier won this game through grit and determination, Bordeaux countered as favourites by all could not break the defensive wall the boys had set up and they made sure that the 9/10 Bordeaux partnership did not happen.

Man of the Match award was given to the players wearing 1 to 23 on their backs they all deserved it, now recuperation before next Friday evening’s Final v Castres in Paris Stade de France a replay of the 2018 final, but this time Montpellier have the chance to succeed and hopefully finally get their names on that Bouclier de Brennus after two final defeats Montpellier are ready for third time lucky.