Discipline has to be adressed 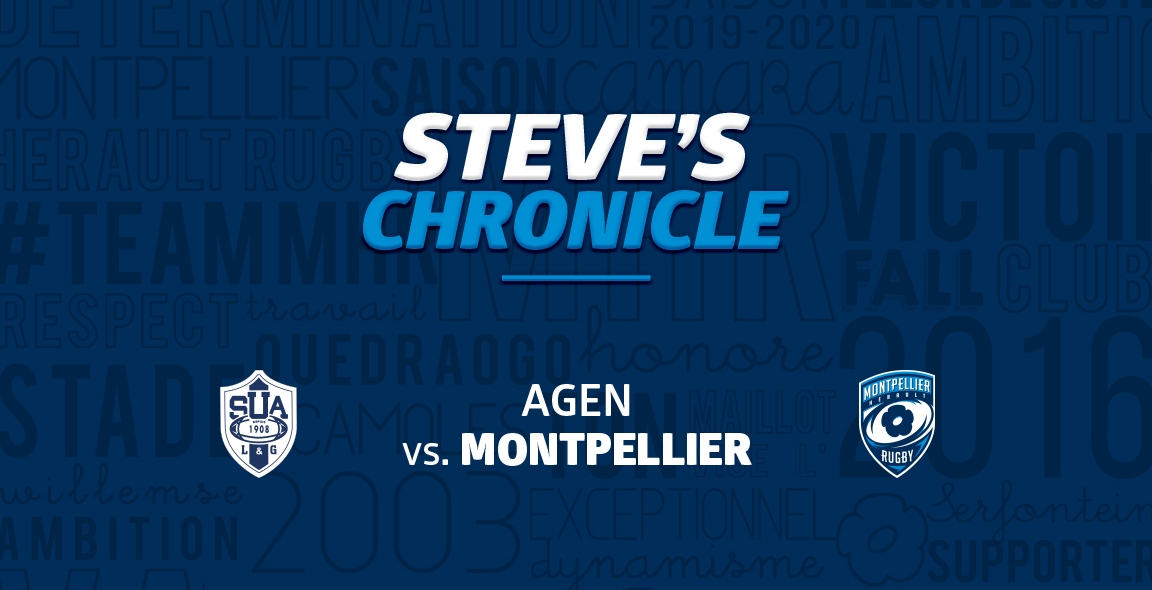 Bayonne newly promoted and riding high in this season’s TOP 14 they are actually in third place before today’s game, a difficult and new challenge for Montpellier, some of the younger members of the Montpellier squad will have a few tingles in the spine when they enter onto the park hearing the Pena Baiona, Bayonne’s signature hymn, the atmosphere in Jean Dauger is always electric.

The match itself was a torrid affair with both teams sizing up each other throughout the game, but once again it was Montpellier’s discipline that let them down. This is not the first occasion this season, their penalty count per match is probably one of the worst in the TOP 14 since the new season got underway. Making matters even worse, 2 yellow cards for Caleb Timu, and Kevin Kornath, a red for Johan Goosen : almost 60mins. playing with just 14 on the park, and around 5mins with just 13. In today’s game this is just not possible the tackle count becomes enormous and the fatigue is doubled, leaving nothing in the tank after 60-70mins. There are always questions about the standard of refereeing when Montpellier are playing, yes it is true often decisions do not go their way, but with the amount of penalties conceded by Montpellier it is possibly just pure human nature to have eyes fixed on the team that is infringing more often than the other. Perfect example in the first 20mins Montpellier infringed 8/10 times, which is just pure folly, especially at this level of rugby. If the penalty count could come under 10 per match then maybe the referees would look at Montpellier with a kinder eye but until then the persecution will continue.

When you look at the end result even with 14 on the park for most of the game, Montpellier could have sneaked this match, when they played reasonable faultless rugby they were the better team on the park and with inferior numbers, but countless knock-ons, forward passes and of course the now continual penalty count against them they have to seriously have a good look in the mirror and rectify this folly before the visit of TOP 14 Champions Toulouse next Sat. afternoon. We have seen from the present World Cup the high number of red cards especially for high tackles which although high were seen week in week out as acceptable not that long ago but this is no longer the case and players need to adapt to the referees and not the other way round.

The match itself produced 3 tries for Bayonne and 2 for Montpellier in front of 12,517 supporters mostly belonging to Bayonne, who encouraged their boys throughout the game, with their famous hymn which pounded out from the hearts of every Basque present. Montpellier tried their hardest at times, but they let themselves down badly during most of the game and finally went down 28-24 a defensive bonus point but that was all when it could have been so much more! This is the third game on the trot Agen, Clermont, and now Bayonne, where points have been left behind because of careless and undisciplined rugby, valuable points that cannot be retrieved and are producing a very rapid downward slide into the cellars of this seasons TOP 14. We are not talking Pro D2 next season, but it will be a rapid descent to the Euro Challenge Cup and bye-bye Champions Cup. This is certainly not in the plans of the club for this season, but week in week out it is becoming a uninvited visual far too often, and has to be readdressed immediately or the situation will become worse.

Xavier Garbajosa has 1 week to knock some sense into his squad before the visit of Toulouse next Saturday, not an immense amount of time to turn this situation to the good. He has installed a very rapid and competitive rugby which the players are beginning to acknowledge on the training park; :now all they have to do is produce it on match days and cut out the endless errors and just maybe Toulouse will be leaving Montpellier next Saturday with nothing but bruised egos, only time will tell.