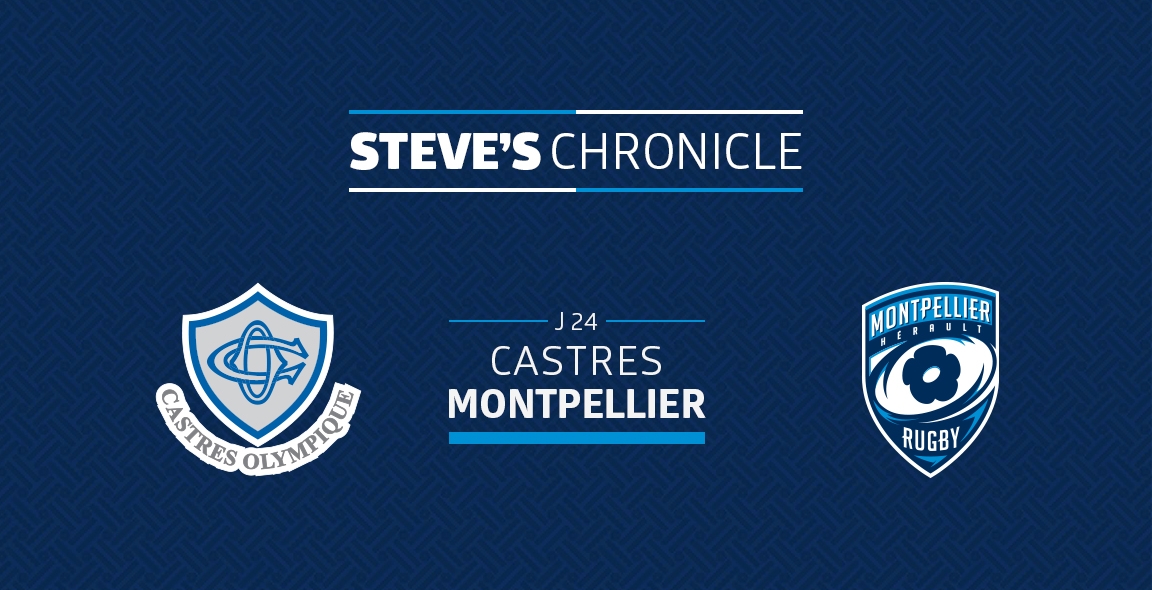 They say if the dreams are strong enough they can turn into reality, Montpellier were away from home this Saturday with just 3 games left to play this season and the opposition was that beast called Castres, so many times they have left Montpellier thinking if only, last season’s final and the very first game of the season in August both lost to a better team. Montpellier must win all three of their last games or that magic 6th play-off place will be just a pipe dream away.
This was always going to be a tough battle upfront with little spectacular ball play by the three quarters, but in recent weeks Montpellier have shown that they are up to the task and anything and everything is possible. One massive task was for scrum half Benoit Paillaugue, to keep the lid on the moaning and weeping of Castres no 9 Rory Kockott who is renowned  for winding up anyone around him and getting the ref on his side with his unlimited gestations and antics.

The game was started by Aaron Cruden in pouring rain and a strong wind behind the backs of Montpellier this would be no easy encounter for both sides. Montpellier had a penalty early on but La Paille was just wide of his target, he also missed another mins. Later but this one was from his own half so he was forgiven but he hit it well and it was an excellent effort.
There was an awful lot of aerial ping pong, and both sides were given nothing away, the tackling was brutal at times and both defences showed their excellence.
The first score was for Montpellier in the 20th min. After mistakes by both teams which had an enormous amount to do with the conditions, Montpellier had a scrum 20mts. from the Castres try line, the ball came out to Aaron Cruden who kicked across field for winger Gabby Ngandebe to latch on to, he out jumped his opposition Dumora, who is a giant in comparison to Gabby our very own TGV, he collected and touched down for the first try of the game, Aaron Cruden converted from the touch line 0-7 to Montpellier. The next 20mins saw both teams drop plenty of balls and some very dodgy line outs, from Montpellier and both Kockott and Urdapilleta kicked a penalty apiece to bring the score to 6-7, after which the ref blew for the break with no others scores.

The second half was started by Castres and there were much of the same, long bouts of aerial ping pong and plenty of mistakes with the ball being both wet and greasy due to the very unpleasant conditions, but Montpellier were dominating the affair, trench rugby provides little scoring chances and this game was going to the wire with very little points difference between the two teams.
Minutes into the second half and Castres knocked over a penalty to take the lead for the first time in the game 9-7, Montpellier were behind and needed to win this game or it would be doom and gloom. The game continued and the mistakes by both teams multiplied this was not a game for spectators, it was for the purists who well know “winning is not important as long as you win”!
59th min. and a Castres scrum, La Paille had been alert all match watching his counterpart Kockott like a demented hawk, giving him no space and lots of verbal, the ball came out La Paille snatched it went wide then inside with a brilliant side step, he crossed kicked for the young Yvan Reilhac who chased dived and again Dumora was beaten, not his best performance of the season the Castres fullback had been at fault for both tries. Yes the boys did get excited but who would not, this gave them a very slender lead 9-12 but at Castres a lead is a lead and all they had to do now was conserve it. Just 20mins left and the tackling became huge, Castres tried their very best to score but the Montpellier defence was defiant and watertight, and after a few scares near the Montpellier try line the game finally ended with a penalty for Montpellier, and the ball was kicked high into the stands by Aaron Cruden.

Victory at Castres a rare animal, but it was a planned and a calculated victory shared by everyone who was on that park  plus of course Vern Cotter and his staff who certainly had some excellent input into this game. Benoit La Paille Paillaugue, was outstanding along with the other smallest and lightest man on the park Gabby Ngandebe, if you weighed both together they would just about make a Nadolo, but the their hearts and courage outweighed everyone from the opposition, both tackled like demons and made hardly any errors. They obviously could not win on their own, they were supported by the whole team who played like a team, Castres have the best defence in this season’s TOP 14 Montpellier showed today they have a better one.
Castres is surrounded by the Black Mountains today they descended on Castres another black day for the 2018 French Champions. Montpellier rejoiced but they have to do more, a week off next week, as the Euro Finals are being played in Newcastle, but the following week Stade Francais at home, then Clermont away, both games have to be won, but confidence is high, if maximum points are taken from the next game v Stade the game at Clermont will be something to watch, Montpellier can still qualify and the next two games could be the biggest and most important of this very young elite rugby club.