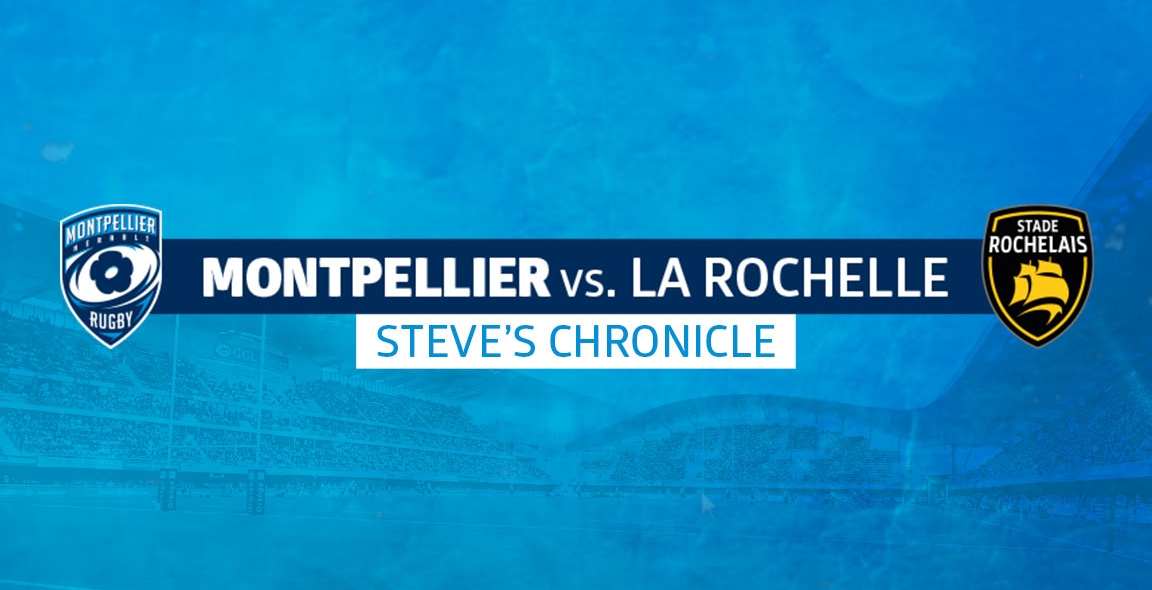 Montpellier versus the Maritime Men of La Rochelle, who are in second position in this season’s TOP 14 just 5points behind leaders Stade Toulouse, and with Montpellier having to play 2 games in midweek in the next 4 weeks because of Covid postponements, things are going to be very tough for Montpellier physically and mentally. A win today would bring enormous relief and a possibility to scamper up 1or 2 positions in the Championship out of that ugly danger zone.

The opening minutes of the game saw La Rochelle with plenty of possession and continually threatening the Montpellier try line, the home defence held strong and kept them out but they did concede penalties and Plisson knocked over 4 in the first half.

Montpellier did however do much better, scoring 2 tries, Anthony Bouthier the first, which started in their own half, the ball going through several hands before our International fullback scampered the last 30 minuts. to go over in the corner, the extras were added by Alex Lozowski, the second scored by Johan Goosen again good work by forwards and three quarters, the extras were missed and when the ref blew for the break Montpellier had a slender 15-12 lead.

PSA would have to have words during the break, the defence was good but the attack lacked inspiration and needed more thrust to keep La Rochelle on the back foot.

The second half started and after only 9mins. Montpellier made 5 bench changes, on came Willemse, Becognee, Haouas, Guirado and Forletta a very wise decision by PSA as the game started to go Montpellier’s way. The next 14 minuts. produced 3 tries, Willemse with the help of the forwards, extras added by Lozowski, Reinach a nearly solo effort after great team work and finally Becognee. Bonus point in the pocket and only 14 minuts left to play, La Rochelle did get a consolation try by Lagrange with Plisson adding the extras, but it was far too little too late and the Maritime Men would have the long journey home with nothing in the pocket, just cuts bruises and little pride as they were well and truly beaten especially upfront where Montpellier produced a solid and aggressive performance.

The second half was all one way traffic and with such a strong bench it was obvious to all that La Rochelle had no answers to the powerful entry of 5 bench players in the 49th min.
Paul Willemse was my Man of the Match but he was supported by a pack of forwards who dominated the second half, which also makes life so much easier for the backs as they never left the front foot and expelled any Maritime attacks before they were even started.

The next Championship game is Tuesday evening v Toulon 21H00 a postponed Covid game, and in the car park next to the Montpellier changing rooms is the new cryotherapie van which should help the players to re-energize during the next few weeks (this is a system using freezing conditions to bring the body back to something near human after far too many physical games in a short period of time.)

Montpellier is nearly out of the blues, if they can beat Toulon on Tues. they will be 9 points and 8 points clear of Bayonne and Pau with still a game in hand over both relegation contenders, if the boys can keep this run of success until the end of the season they will finish in a healthy Championship position and just maybe another Euro Challenge Cup in the silverware cupboard if they can beat Les Roasts Beefs of Leicester at Twickenham in a couple of weeks.