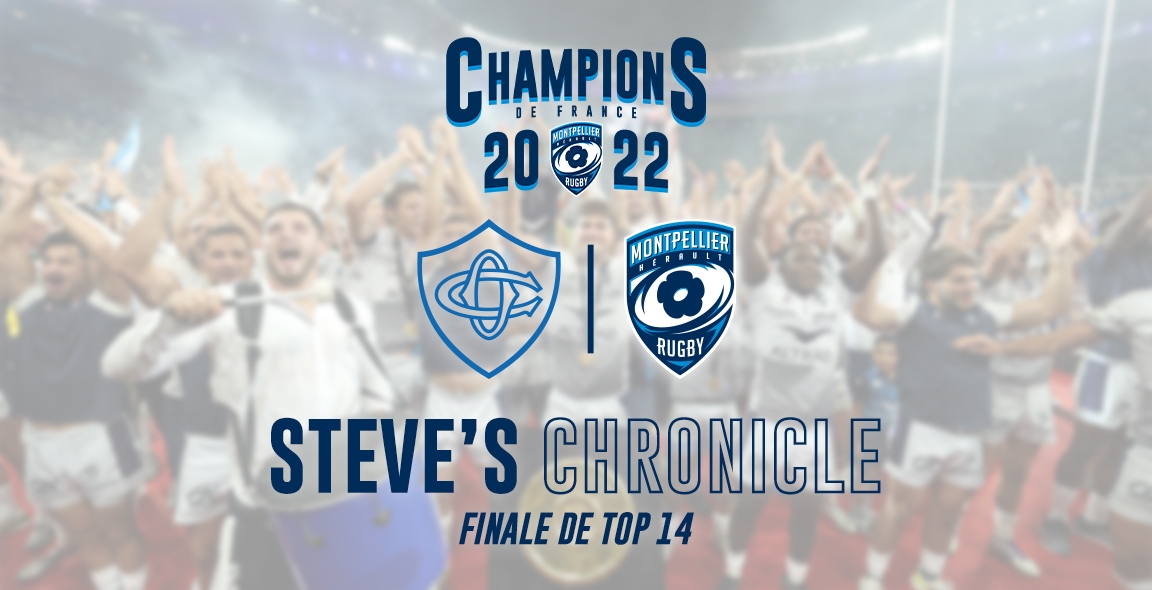 NO ONE gave Montpellier any chance of becoming French TOP 14 Champions for the very first time in their short but incredible history, bar Montpellier that is; all the experts, pundits, glass ball gazers, etc. etc. did not think it was possible, but the boys pulled off an incredible victory beating Castres by a very convincing score of 10-29, the heaviest defeat for some years as far as final results go. Will this change the attitude of Presses rugby view of a team that has progressed over their short time amongst the elite, I very much doubt it, but miracles do happen.

The final was a joy to watch especially if you were Montpellierian, in front of a full house of 80,000 vibrant supporters this was a battle of the trenches with hits so hard they could be heard around all the outskirts of Paris.

It was hard, sometimes, ugly, and the box kicking used far too often, but this was always going to be the case, “Montpellier can only defend” they said but in a very chaotic 8 mins. of the first half they scored 3 tries to Castre’s zero, maybe they know how to attack as well!!!

The first, Arthur Vincent after a grubber kick from Zac Mercer and over in the corner the youngster dived  for the first of this final, the second goes to the forwards maul, maul, and remaul, finally Florian Verhaeghe, passing through the middle of the ruck got the pigskin on the deck no hesitation from the ref try, Babillot did try a Kockott type of whinge but to no avail, the arm raised towards the Heavens and try awarded, the third was a masterpiece of fast running rugby  with passes that would embarrass the All Blacks they were that good, finally a reverse pas to Anthony Bouthier and he strolled into the Hallowed ground, with one try converted the lead 0-17 and just 14mins. on the clock.

Montpellier out gunned, out muscled and out played, their opponents, and on the rare occasions that they did make ground the Montpellier defence was there to tackle any problems, Castres defence was good and it certainly stopped the water gates opening for a flood of tries. The scrums were tough but more often than not the front five moved forwards giving the back row ample time to join the attack or get their defences organised thus giving the opposition no chance of advancing forward.

Penalties were added before half time 2 for Montpellier and a single one for Castres, so when the whistle was blown for half time the score a commanding 3-23. One could say final all sewn up but Montpellier had scored 3 tries in several mins. in the first half Castres could do the same but most knew already that with total domination by Montpellier in this first half there was great doubt if Castres could pick themselves up from the precarious position they were in.

The second half got underway and Castres tried their level best to trouble the boys, but that defence was brick wall, and although they had a couple of efforts denied for ball held up over the line they could not score that all important try to move their scoreboard forward. Every penalty given to them was kicked to touch, attempts at goal were not enough, time and time again they tried but the defence failed their progress.

As the clock was gaining time so was the chance that that Bouclier de Brennus was to have the name of Montpellier engraved on it for the first time in the clubs history, Paolo Garbisi added another 3pts with 10mins. left on the clock 3-26, which meant Castres had to score 3 converted tries to steal the Bouclier, possible yes but very unlikely.

Castres did score their first try of the game in the 75th min. a kick from Arata and Botitu followed up and had a free run to the line OUFF!!! honour had been saved, Dumora added the extras the score 10-26. Just 3 mins. left on the clock and Handre Pollard off the bench kicked the final score of the game and after that that it was all MONTPELLIER, the ref blew for the end of this final. Man of the Match was given to Zac Mercer but for me anyone in a Montpellier shirt numbers 1 to 23, the players not selected for this final, the coaches, the staff and of course the supporters all merit the award, and at the end the game it was Fulgence Ouedraogo and Guilhem Guirado who received the Bouclier from President Macron, 2 players who finished their careers in glory, thankyou guys.

Montpellier had just won their very first Boucler de Brennus, the players exploded, the bench, the coaches and one player who deserved to be on that team sheet but was not, Fulgence Ouedraogo he has given so much to this club since the Ecole de Rugby at a very young age until his retirement from the game at the end of this season, and of course the supporters who had not stopped all match from encouragement and singing to keep the boys motivated.

There is also one man who deserves applause and that is our President Mohed Altrad, he picked up the pieces of a club in a disastrous situation, financially and sportively, as he said himself he did not know much about rugby, but willing to learn, yes there were mistakes on the way but then who is perfect, he rectified whose mistakes and continued forward, 12 years on the Bouclier de Brennus will sit in the Trophy room at the GGL Stadium with the name Montpellier 2022 engraved on it and no one can take that away.