A match of two different halves ! 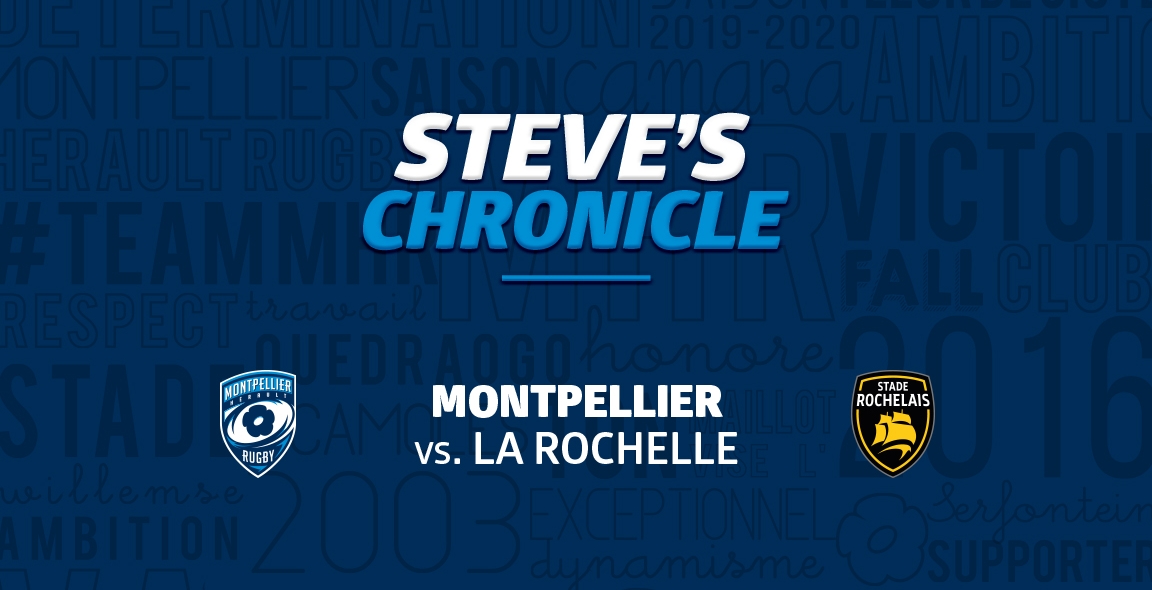 The third game of this new season and the visitors were the maritime men from La Rochelle, a team always looking to gain points away from home, and very often provide the supporters with a fast running game of rugby. Montpellier on the other hand want to progress after their bonus point win last week against Pau but with World Cup absentees and still an infirmary close to capacity this would be no easy task for the home team. The conditions were just about perfect for a late Saturday evening ko. with a slight breeze blowing from right to left but nothing really to worry the 30 participants taking part.

First on the scoreboard were the Maritime men with a penalty from West after an infringement from our local boys. Lets hope they have learned their lesson from previous weeks of ill discipline and eradicate these silly penalties which are truly gifts to the opposition 0-3. The 10th minute and Aaron Cruden levelled the score with a penalty 3-3 Montpellier were not playing their best. Very little ball to use and when they did have it, some misguided kicking returned the ball straight back to the Maritime men, so for much of the first 20mins Montpellier defended, this they did reasonably well but they were under the cloche, and it was La Rochelle who were doing all the attacking and advancing down the park on numerous occasions. Their endeavour paid off with a try from Roudil. Scrum in front of the Montpellier posts the ball came out clean, a miss pass from West and an easy score for the centre Roudil, the extras were added and La Rochelle increased their lead to 3-10. Just before half time Cruden added another penalty to go to the break 6-10 down, the first half performance was far from brilliant from Montpellier and there would be words spoken by coach Xavier Garbajosa, who did not look like a very happy bunny, hard work throughout the week and the display was far from the coaches asking.

The second half got under way Arthur Vincent and Enzo Sanga coming on to replace, Vincent Martin and Kahn Fotualii, whatever was said at half time by coach and Capt, certainly changed the Montpellier attack. The decisions made and the communication between players was a massive improvement and Montpellier started to play good rugby and advance down the park towards the Maritime try line. Aaron Cruden knocked over another penalty to bring the home team to within striking distance 9-10 and plenty of time left to win this game. Montpellier started to find holes in the Rochelle’s defence, an excellent break from Caleb Timu left just 5mts short, but some good pick and goes from the forwards finally saw Paul Willemse crash over, after his injury which left him out of the French National team for the World Cup in Japan this was a just deserve, Cruden added the extras 16-13 and for the first time in the match Montpellier had their noses in front. Just minutes later, up popped Paul again, the usual style of this giant, arms wrapped firmly round the ball and using his power from 5mts he again crashed over this time it was Anthony Bouthier who added the extras and Montpellier had light between the two teams 23-13. West added another penalty for La Rochelle to help their cause 23-16 but they were suffering from the onslaught of the Montpellier attack. The try of the game came from Henry Immelman who attacked from moreorless his own line the ball went through hands before he finally went over a try of the Gods and Anthony Bouthier added the extras 30-16.

Montpellier was home and dry just 7mins. left to try and get the attacking bonus point, they tried but the Rochelle defence held out, finally the ref blew for the end and Montpellier if the truth was known the boys were well happy with the 4 points. Two halves two very different contrasts, the first was poor but a second half where Montpellier attacked kept the ball and made La Rochelle suffer for their high energy first half. Paul Willemse was back to his good form with two tries and an excellent performance, and Caleb Timu is probably one of the best signings for a few seasons he is showing massive strength playing at No 8 watch out Louis Picamoles after the World Cup. The youngsters again played their part and are cementing a regular place in the team, Vincent Guidicelli had to leave the park with a bad concussion, replaced by Valentine Seille for his very first TOP 14 game, he played his part well, and with all of our hookers either injured or on World Cup, duty he will be probably first choice next week when the boys go to Agen looking for their first away win of the season.

All in all a good victory and 4pts in the pocket, playing not great in the first half then improving in the second, what happens when they play well for 80mins the World is their oyster.