MAYBE A BLESSING IN DESGUISE 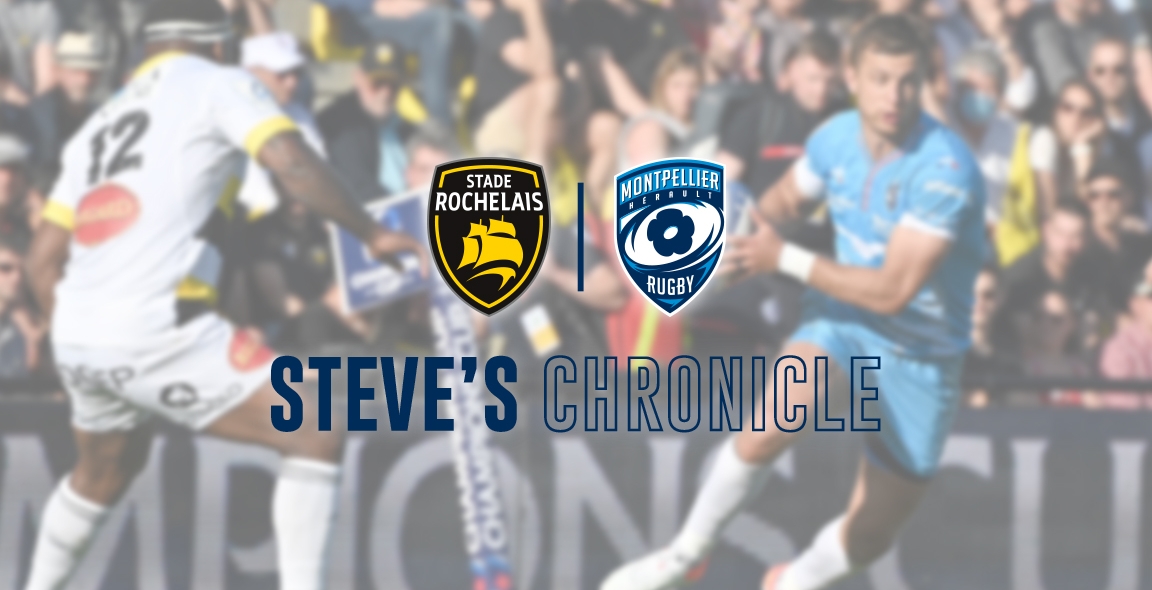 Champions Cup quarter final v La Rochelle never an easy place to go as it’s always a full house and has been for several seasons every home game whether TOP 14 or Euro rugby, Montpellier have only once reached this stage of the competition and that was a few seasons ago where they were beaten by Clermont again away from home. This season the main interest is obviously the Bouclier de Brennus and as they are still leading the TOP 14 Championship by a couple of points, this is the trophy that everyone wants to get their hands on.

Montpellier has several key players out with injuries and of course the one match ban on Momo Haouas which will not help their enormous task this Sat. evening in La Rochelle. The team has been credited this season with their great defence and its sure today they will be defending for long periods of the game.

The game got underway and it was all La Rochelle, they had the ball and Montpellier had to defend to keep their lines clean, in the 13th min. the ball was carried down the left and it was Priso who got into the corner for the first try of the game, West added the extras and the score

7-0 to the Maritime men, minutes later West added his first penalty to move the score onto 10-0 for the home team. Montpellier were suffering from the onslaught of the home team and a second try was scored this time by Vito after some good work from the three quarters, again West added the extras and already La Rochelle had a commanding lead 17-0, with a full house cheering on their team this could be a very tough evening for the boys.

When Montpellier did get hold of the ball they tried their level best and it was in the 29th min. the forwards kept the ball and attacked at close quarters, finally Guirado then Henry Thomas was bundled over the line to open Montpellier’s account, Louis Forsans added the extras and the Montpellier were only 10pts. adrift 17-7. Montpellier continued to defend as they had little ball and hardly any chance to attack the Rochelle defence, finally the Ref blew for half time with the score remaining at 17-7.

The second half got under way and it was Montpellier who started well, a mix up between 2 home players and the ball was gathered by Reilhac who was left unmarked and he ran in the second try of the game for Montpellier, Forsans added the extras and Montpellier were back in the game 17-14. La Rochelle once again plied more attacking pressure and this time it was Botia who crossed the line, the extras were missed by West but La Rochelle extended their lead to 22-14, many teams would maybe have given up the ghost but not Montpellier, with nothing to lose they attacked, some excellent work from Benoit Paillaugue and Zach Mercer who combined down the touch line for Mercer to go over in the corner the extras were missed but the score was getting very close 22-19.

La Rochelle saw the danger and started to play better and faster, a trio of silly penalties from Montpellier gave West the chance to add another 9pts. to the tally and increase the lead of  La Rochelle to 28-19 with just 10mins. left on the clock. In the dying seconds another penalty and West gave La Rochelle their victory and a place next week in the semis, the final score 31-19 to the Maritime Men.

A brave effort from the boys but this could be the blessing in disguise, they need a victory with the last home game of the season in a couple of weeks time v Racing who are playing also in the Champions Cup this weekend, if they win they will be again on duty next weekend in the semis, while Montpellier will have a rest weekend with no game, which at this stage of the season a week off, is priceless. A victory v Racing could place Montpellier in a very strong position for an automatic semi final play off place for their quest for the Bouclier but there is still plenty of water to run under the bridge and several teams who will also be trying for those direct semi places. Champions Cup is finished for another season, the boys did well and will be qualified for the same competition next season but the main goal this season is that Bouclier de Brennus which Montpellier so desperately desire, hopefully if they do get to the final it will be their third final and often the quote is “Third time lucky”, but we are not there just yet.