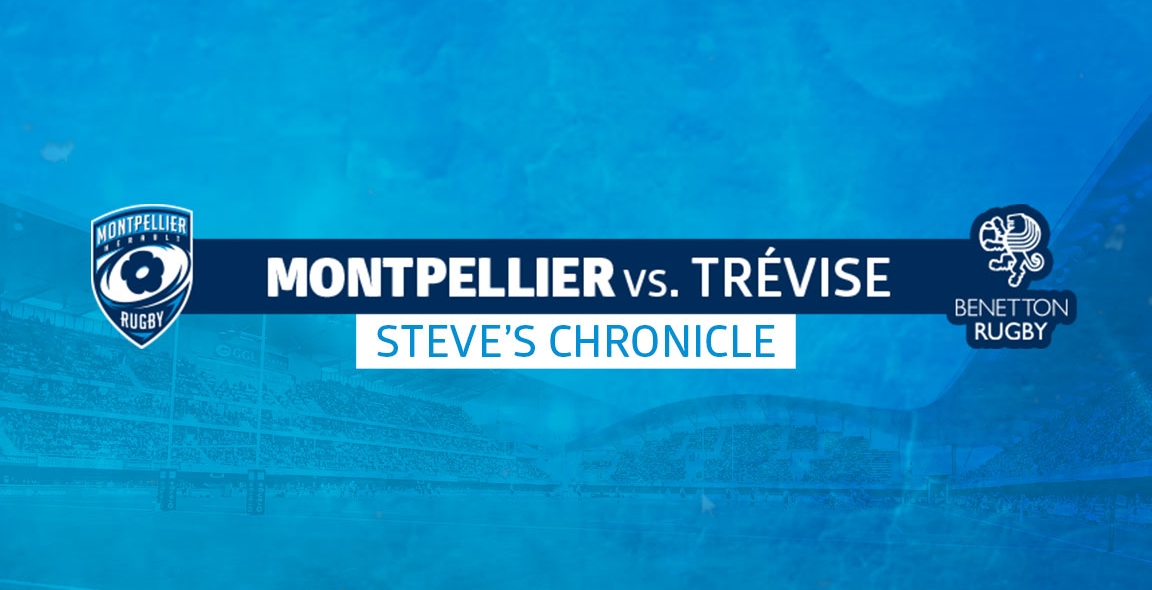 Home European Rugby Challenge Cup quarter final and the opposition is Benetton Rugby from Trevise Italy, this is the first ever appearance of an Italian club at the quarter final stage of any Euro rugby competition, so well done to them for getting this far. Montpellier had dropped down from the European Rugby Champions Cup in this Covid hit season. This could be a blessing in disguise as the TOP 14 season not going great and a possibility of silverware could bring out the best in Montpellier.

The home team had picked a mixture of experience and some younger elements unknown to most, Paul Vallee, Samuel Maximin starting and on the bench, Tyler Duguid and Robert Rodgers, this is an excellent opportunity to blood these youngsters into European Rugby Challenge Cup. Rarely have italian teams won these european games, but they can be very dangerous if not respected this could well have its surprises if they are not taken very seriously.

The game started in not the greatest of weather, continuous rain would not help the ball in hand situation, and there will be plenty of scrums and penalties given by referee Karl Dickson, penalties were exchanged early on with 2 for the italians and one for Benoit Paillaugue 3-6.
Montpellier used their forwards well and got themselves to within 5 meters of the italian try line and after some serious pounding the ball came back to Benoit Paillaugue who dived over for the first try of the game, he missed his own conversion but gave Montpellier a narrow lead 8-6. There were 2 or 3 bouts of junior fisty cuffs but more shoving and  the referee had to call the 2 captains to quiet things down before cards were issued, that did not work as Paul Willemse was the first to go after a use of his hands. The following penalty by Garbisi gave Trevise a slender lead 8-9, this again was short lived with a fine Anthony Bouthier drop goal and Montpellier retake he lead 11-9, again penalties were exchanges, 2 for Benetton and 1 from La Paille, score 14-15. The game was a sloppy affair but the weather had something to do with that, plenty of scrums and penalties, but things changed in the 38th minut free kick near the italian line and with the forwards in mass they bundle Paul Willemse over the line the extras were added and Montpellier had a half time lead of 21-15.

Second half got underway and probably during the break PSA did not hold back in his half time talk, far too many mistakes and just not enough aggression plus some sterile attacks by the hosts. The only thing you don’t need when playing not at the teams capability is an early score and exactly that happened, Garbisi got away near the touch line and scampered all the way to the line and with an impress dive he just got the ball down before having a body part in touch, video several times then finally the try was awarded, Garbisi converted his try and the Italians sneaked into a one pt. lead 21-22.
The Montpellier forwards were gaining in strength and the italians started to tire, after more good work from the pack Benoit paillaugue scored his second try of the game which he converted to ease the score to 28-22 but the boys were not out of the woods just yet. Again penalties were exchanged to move the score onto 31-25; Yacouba Camara received a yellow card for multiple infringements so Montpellier was down to 14 for the rest of the game. There were some hectic moments were Trevise attacked and some last ditch tackling kept them out as a converted try would have given them a 1point lead but gladly that did not happen, the Montpellier defence held tight and finally with a penalty the ball was sent out of play and Montpellier had a semi final place booked against Bath. The forwards kept Montpellier in this game and my Man of the Match was Paul Willemse followed by his second row partner Bastien Chalureau, both used their strength and power throughout the game and did some good stealing around the rucks and mauls.