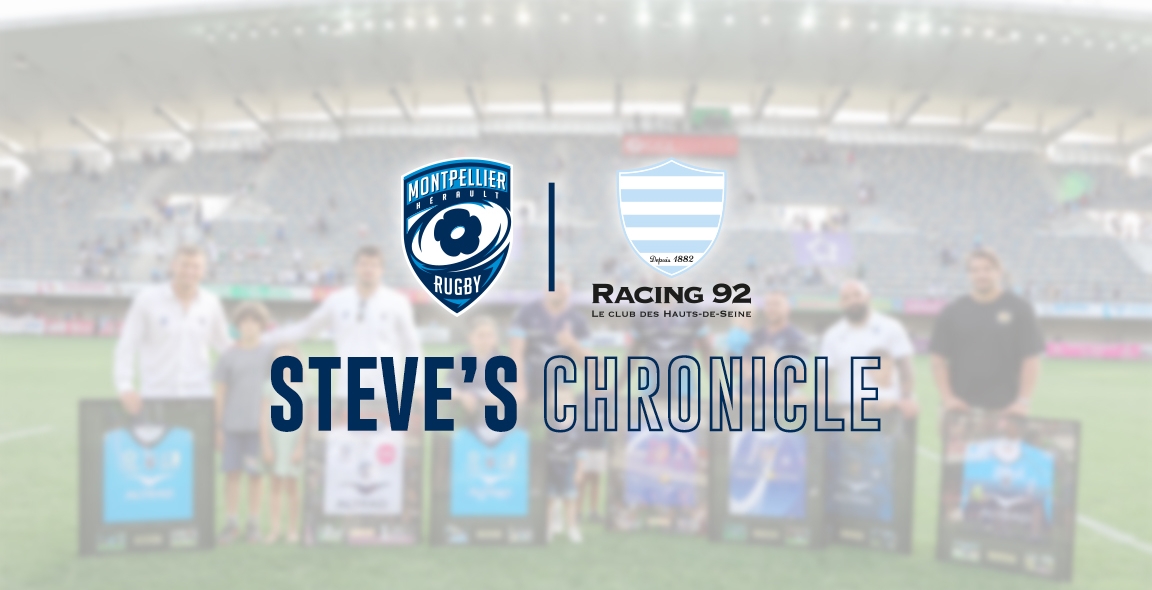 Racing was the visitors for this last home game for Montpellier but both teams needed victory, Racing to remain in the TOP 6 and Montpellier to stay at the top of the Championship table, an awful lot at stake with the final 2 rounds of games before the playoffs. The weather was perfect for the supporter’s maybe a little on the hot side for both teams; the ref decided an after 20mins. water break in both halves which would be a benefit to all the players on the park. This was also the last home appearance s of several long serving members of the squad but more about that later.

The game got underway and this looked like a battle of two very good defences, the tackles were ferocious and nobody was giving an inch, penalties were exchanged by first Gilbert for Racing then Benoit Paillaugue to keep the scores level at 3-3 after 8mins of play. The first try of the game came in the13th min. Anthony Bouthier found space down the wing from his fullback position, the tiniest of holes appeared he accelerated and the gap was made, he raced towards the line a last grasp tackle was of no avail as his momentum took him over the line for a magnificent try which sent the full house into chorus, from the touchline La Paille converted and Montpellier had a 10-3 lead.

The game continued with massive hits from both teams and probably too much box kicking but there was so much at stake and not one player wanted to be the one responsible for a mistake. Montpellier did have their chances but some last ditch tackling kept them from scoring. They did have a couple of close range penalties where they decided to go for the penalty touch instead of taking the 3pts. available, this came to nothing and hopefully it will be not, a bad decision at the end of the game, in the dying mins. of the first half La Paille added another 3 points as the ball sailed threw the sticks the ref blew for the break with the boys having a deserved 10pts. lead 13-3.

The second half got underway and it was more of the same, excellent defences from both teams this game was going to the wire with absolutely nothing between the two sides. La Paille had a penalty hit the post from just over 50mts great effort, mins. later

La Garrec missed a penalty the stadium breathed a sire of relief as it was just wide.

La Paille well on form with his boot knocked over a couple of penalties to extend the lead to 19-3 which gave the boys some space between the 2 teams.

There were 2 massive standing ovations for Guirado and La Paille as they left the park on probably their last home appearances and the reception was even louder for Fufu as he came off the bench for his final chapter of a club history that seems to be everlasting.

The game continued with Gela Aprasidze at scrum half, Racing attacked and trying to stop the try being scored he illegally used his foot, penalty try and yellow card for the youngster who had only been on the park for mins. 19-10 and Montpellier down to 14 players for 10mins. Machenaud added a penalty with just 8mins. left on the clock 19-13, much to the relief of everyone Paolo Garbisi added a last minute penalty 22-13 as Fufu left the park to a chorus of Fu Fu Fu Fu, he deserves everything as a great servant to this club for many years.

The Man of the Match went to Fulgence Quedraogo but the other 14 starting players and the bench all deserved a mention as this was a battle of the trenches and Montpelier were the worthy winners, a water tight defence and some great play by all.

Finally the ref blew for full time and it was time to celebrate, qualification in either semis or at least a home barrage depending on the last game of the season away to Clermont, then the lap of honour for all, then kind words from the President Mohed Altrad before the players Martin Devergie, Handre Pollard, Guihem Guirado, Kelian Galletier, Benoit  Paillaugue, and finally Fufu ( Fulgence Quedraogo) all received their rugby shirts which they started playing in so many years ago and an extra special video on the big screen for the celebration of Fulgence with words from ex and present players of the club, there were tears from some of our female back office staff and some of the guys were not far away from shedding a couple of tears.

All the supporters went home happy that is all the Montpellerian supporters now will it be direct into the semis or a barrage home playoff but that will be decided in a couple of weeks time in the last game of the TOP 14 Championship away to Clermont.