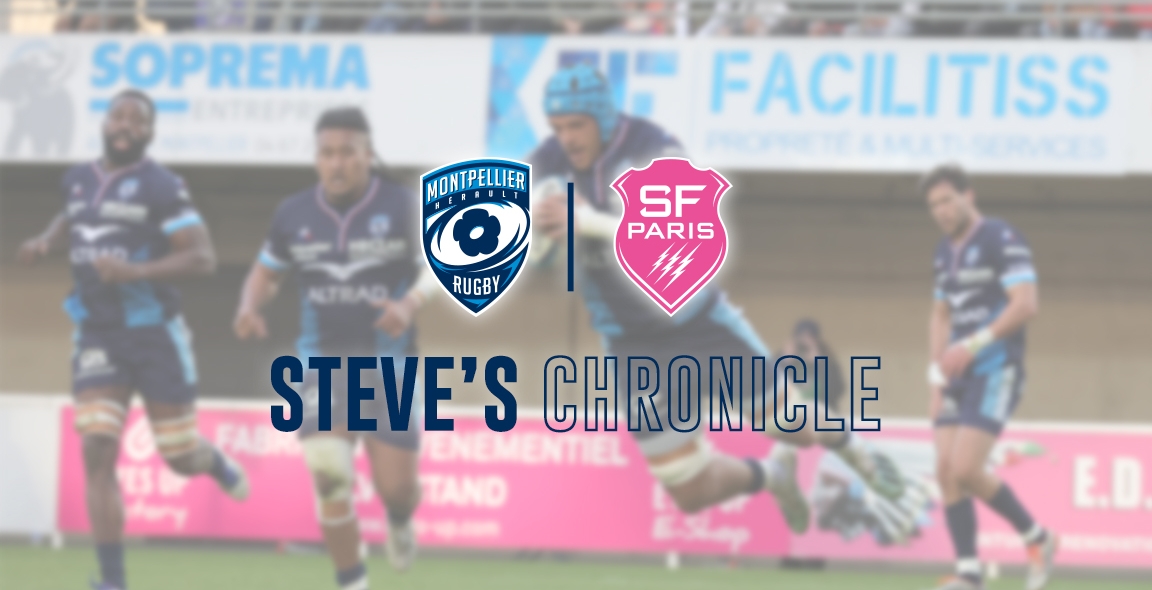 The boys have a tough game ahead of them tonight, the visitors Stade Francais, a team that is not having the best of seasons but they are a solid team with plenty of class and always difficult to manoeuvre, so Montpellier will have to be on their guard if they want to come away with a minimum of 4 pts.

The game started in brilliant sunshine (17.30 k.o.) but soon the temperature dropped as the evening progressed and the sun disappeared behind the stand. The first 15mins. both teams tested each other, the ball was being thrown about and Stade looked dangerous every time that they had ball in hand, but the Montpellier defence was as per usual solid in all quarters and kept everything that was propelled against them out.

Louis Foursans was first on the mark with a penalty in the 6th min. after a fault in a ruck by Roelofoa 3-0 to the hosts. The game continued up and down the park and the following mauls and rucks were very aggressive from both teams, but Montpellier held their defence making sure nothing got through.

The first try of the game was for Montpellier, it stated with Anthony Bouthier, in his own half, then Julien Tisserson made rapid ground before many hands touched the pigskin, with Zac Mercer the finalist who scampered down the touch and into the hallowed ground behind the sticks, Louis Forsans added the extras and Montpellier were 10-0 to the good, this did give the supporters plenty to shout about and the noise from them grew in volume as this was the first time in many months that the restrictions because of Covid had been lifted and they were present in mass.

Chapuis received the yellow card for a tap down when Montpellier were on the attack, and the young, talented Louis Forsans obliged with another 3pts from the penalty, and Montpellier moved their score to 13-0. Sanchez had to leave the park for a head commotion and straight away Segonds had a shot at the sticks but his attempt was just wide, he did get a second chance mins. later and Stade had their first score on the board 13-3. There were no more scores and the ref, whistled for the break, Montpellier had a reasonable lead but they needed to do more as Stade always looked dangerous every time they attacked.

The second half got underway, the temperature had quickly dropped as the evening got longer, both teams tried to play rugby but some silly faults stopped the game from being a classic.

Stade attack down the wing after Lapegue caught a crosskick he ground the ball and the ref raised his arm for the try, the supporters made so much noise that the ref went to the video and it was plain to see the winger had crushed the touch line with his boot, no try was the decision.

Minutes later another ref’s video, this time it was Montpellier who attacked, Stade sitting on their own try line stole the ball in the tackle as it came out Alex Becognee dived through the ruck and grounded the ball, the video lasted a full 5 mins. before Mon Brousset awarded the try, Louis Forsans again added the extras and Montpellier had a commanding lead 20-3, now they could attack for that all important 3rd try and the bonus point.

As the game continued Montpellier were now looking the stronger and Jan Serfontein showed his presence with some muscled runs through the middle of the park, that was when he was not knocking opponents over with his great defensive techniques. Gela Aprasidze had replaced Cobus Reinach and as per usual he was darting all over the place, his box kicking was a great improvement on hid last showing and was supplying excellent ball to his backs.

Moses Alo-Emile got himself a 10mins break in the bin for some dubious play in a ruck, but Stade still attacked at every possible moment, there were some scary moments but the excellent Montpellier defence held strong and was truly water tight. Louis Forsans added another penalty to move the score onto 23-3, but the boys still needed that 3rd try for the bonus point.

Finally in the 74th min. Gabby Ngandebe went on the run near  the Stade try line and with  couple of side steps he went over for his try, Anthony Bouthier added the extras and the score 30-3 for Montpellier with 5mins. left on the clock.

Stade looked shattered and the fight had left them, all they could do was stop Montpellier from scoring again and finally the ref blew for full time and Montpellier had the 5pts in their pockets. Bravo !

This was a team performance with everyone doing their duty especially in defence, several mistakes but nothing too serious, Jan Serfontein and Zac Mercer shared the MAN of the Match award for me, they both gave their normal 100%, but the collective was the winner of this game.

Montpellier is now just one tiny point behind leader Bordeaux, after they lost to Toulouse last night but claimed a defensive bonus pt.

The stadium was not full to the brim but who were there made plenty of noise to support their heroes which is great to see after all this Covid mess.