MONTPELLIER WITH COURAGE AND DETERMINATION ! 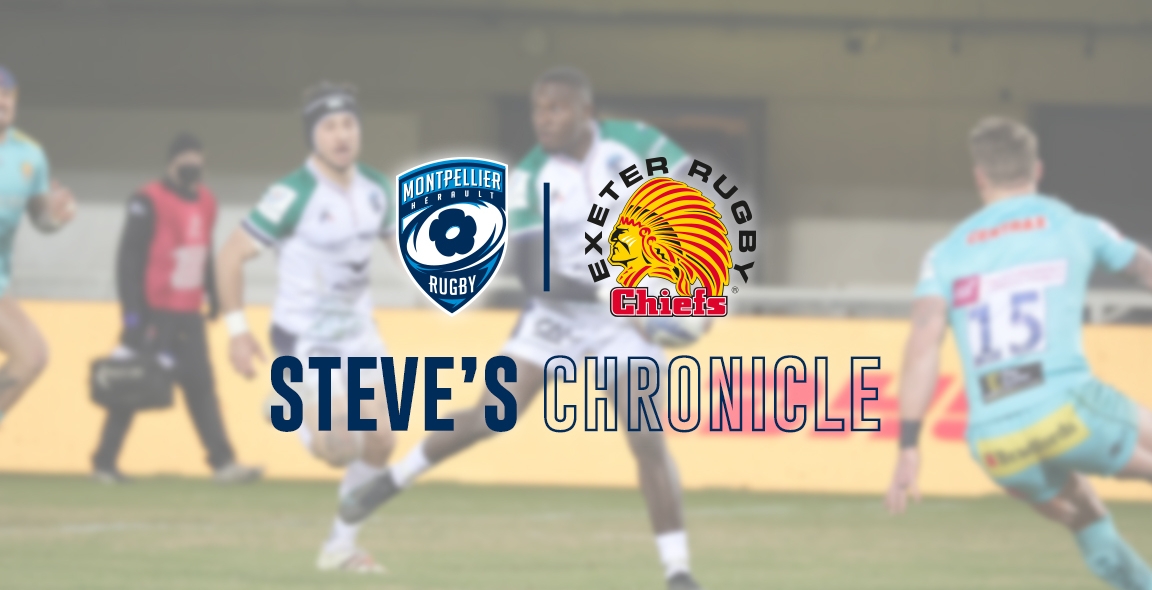 The last chance Saloon was here for Montpellier, they needed one little point v Exeter to qualify for this season’s 8th final place playoffs, but having Exeter as opposition this was no walk over. Exeter was finalists last season and has been playing well in the Premiership this season, a team  full of British internationals led by Mon. Rob Baxter who has been there for many a season, developing many of these boys from raw recruits to International standard, Montpellier have had no success against Exeter so this will be a very tough encounter for our boys. The obvious other factor is that any British team love to take on their French counterparts and the standard is normal raised to near International level, so an excellent match is expected.

The match attendance was limited to 5,000 because of Covid so the supporters would have to use their voices to be heard and encourage the boys going forward, this they did with pride and if you closed your eyes one thought that the stadium was nearly full capacity.

The game got underway in very cold conditions with the temperature dropping close to zero but clear skies and hardly any wind, conditions nearly perfect for a fast game of running rugby. As expected the game was fast with both teams playing fast running rugby, Exeter had already qualified and Montpellier had nothing to lose, only needing one point to make the next round of the competition. First on the scoreboard were Exeter with a classic touch, maul and over the line they went, the scorer Sam Simmonds, the extras were missed 0-5.

Montpellier quickly followed, a long kick from Exeter found Gaby Ngandebe on his 22, his set of  at an amazing pace straight through the middle of everyone left right, right left leaving all in his wake, the final pass went to Anthony Bouthier who just crossed the line and went under the sticks, Louis Foursans added the extras 7-5, to the hosts, further first half tries were added by Paul Williams, a forwards affair, catch drive and the final propulsion over the line, 14-5, then  a Jan Serfontein effort  from the base of the scrum and with his strength forced himself over the line to add another 5 pts. both extras were added by Louis Foursans and Montpellier had a good lead nearing half time.

Exeter were not going to lie down and die and before the ref blew for the break they added 2 tries themselves both converted, the last 10mins.of the first half Montpellier were camped on their own try line but they defended with guile and courage to keep the Rosbifs from scoring and at the break the score was 24-19.

The second half got underway and it was much the same as the first, fast, muscular and little errors from both teams, Exeter were first on the scoreboard with another Simmonds try which gave him his hat-trick, extras added by Simmonds and Exeter had their bonus point with 4tries and their noses in front 24-26. The game continued at the same fast pace with both defences working overtime, Louis Foursans added a penalty to take the advantage to Montpellier 27-26, this was going to the wire and still anybody’s game.

With just 10 mins. left on the clock Montpellier defending like men possessed, Reinach Corbus intercepted an Exeter attack and set off like a 100mts sprinter, he galloped the 80mts and scored under the sticks, Paolo Garbisi added the extras and Montpellier were nearly home and dry 34-26, in the dying mins. Garbisi added the final penalty to secure the win 37-26. Finally the ref blew for full time and Montpellier had a famous well earned victory, they move onto the next phase of the competition and their opponents will be Harlequins of London, more Rosbifs but this stage is now games home and away, a tough ask but always possible if they play like they did tonight.

Everyone gave their level best and the pack was superb, Man of the match was given to Yacouba Camara, Jan Serfontein probably deserved it just as much as Camara but I’m very sure that would not have ruined his after match celebrations with the boys. A well deserved victory let’s hope Montpellier can carry this forward and back into the TOP 14