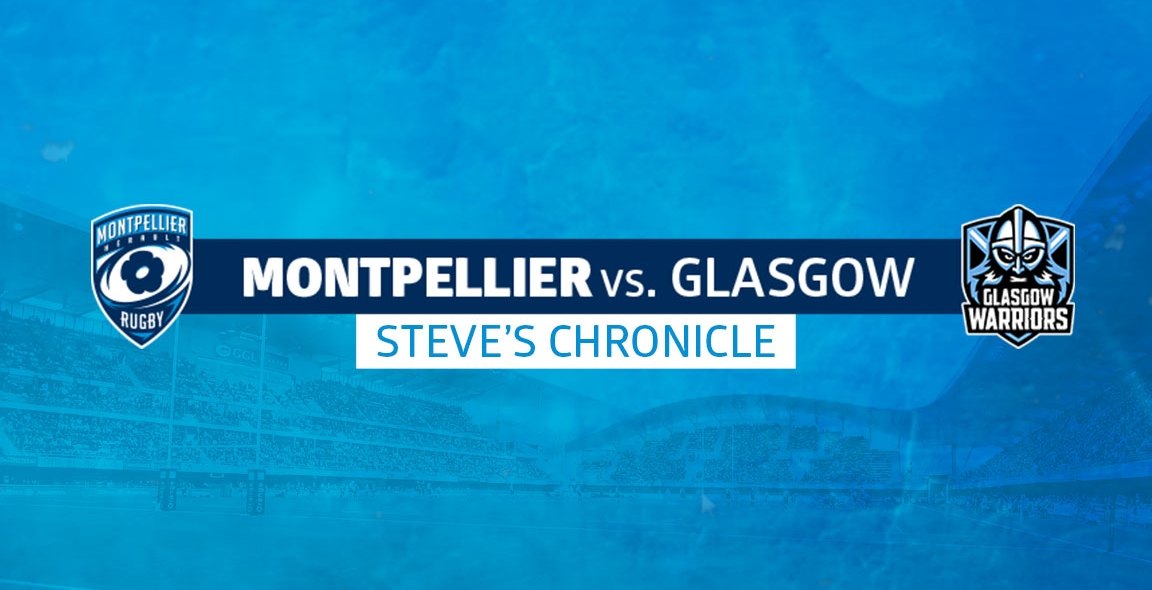 The opposition was Glasgow Warriors and they are well known for their attacking flair, so this could be a very exciting game of rugby. Montpellier are starting to reap success after their away win against leaders Toulouse last weekend and have been trying to turn their season around after some poor results in the earlier part of the season.

The start of the game saw both teams attack each other and the first scores were penalties exchanged between Adam Hastings and Alex LOZOWSKI, giving the Warriors a 3-6 lead around the 24min mark. The game flowed with plenty of good rugby but was often spoilt by some sloppy handling or bad decisions, but still enjoyable to the eye.

Just before the half time whistle Montpellier attacked the Warriors try line and it was Guilhem Guirado who forced his way into the hallowed ground for the first try of the game, he was helped over by the rest of his forwards, and with Alex Lozowski adding the extras Montpellier went to the break with a 13-9 lead, probably not enough to win the game but still very positive.

Montpellier started the second half with an excellent try from Anthony Bouthier, Vincent Rattez had a great run down the touchline and slipped the ball to Montpellier’s International full back who cruised under the sticks, the extras were added by Alex Lozowski to give Montpellier a deserved 20-9 lead.

Bastien Chalereau had 10mins in the bin for an infringement leaving his team mates to battle on, but mins. later Ioane was shown a red as he high tackled without use of the arms, this is becoming more and more frequent in the refereeing world and players need to pay attention to this very dangerous exercise. The Warriors now down to 14 for the rest of the game which was a massive advantage for Montpellier, hopefully they could take advantage of this situation and strike forward for that ¼ final Challenge Cup home tie next weekend.

Penalties were added by both teams and Hastings kicked all Glasgow’s points from Montpellier infringements but it was never enough as Montpellier held on to the final whistle to come out worthy winners 26-21 and go through to a ¼ final place next Sat. evening against the Italians of Benetton.

There were some close moments in the second half but a very solid defence kept Glasgow try less, and Montpellier looked the more likely to score but they kept just enough breathing space between them and Glasgow.

Now things become a little complicated, Montpellier are still in the danger zone of the TOP 14 but they should get themselves a little higher up the Championship ladder, but obviously not high enough to qualify for next years Champions Cup, so why not go for the Challenge Cup title which will give them a place in next seasons Champions Cup. Just 3 games to win quarter, semi and final, but always never easy as the semi and final could be against English opposition. Montpellier did win the Challenge Cup in 2016 v Harlequins and other final victory will make this season so much better as it has been a struggle with Covid and everything else this season, and nobody refuses the cherry on the gateau and another Euro Challenge Cup in the cabinet.