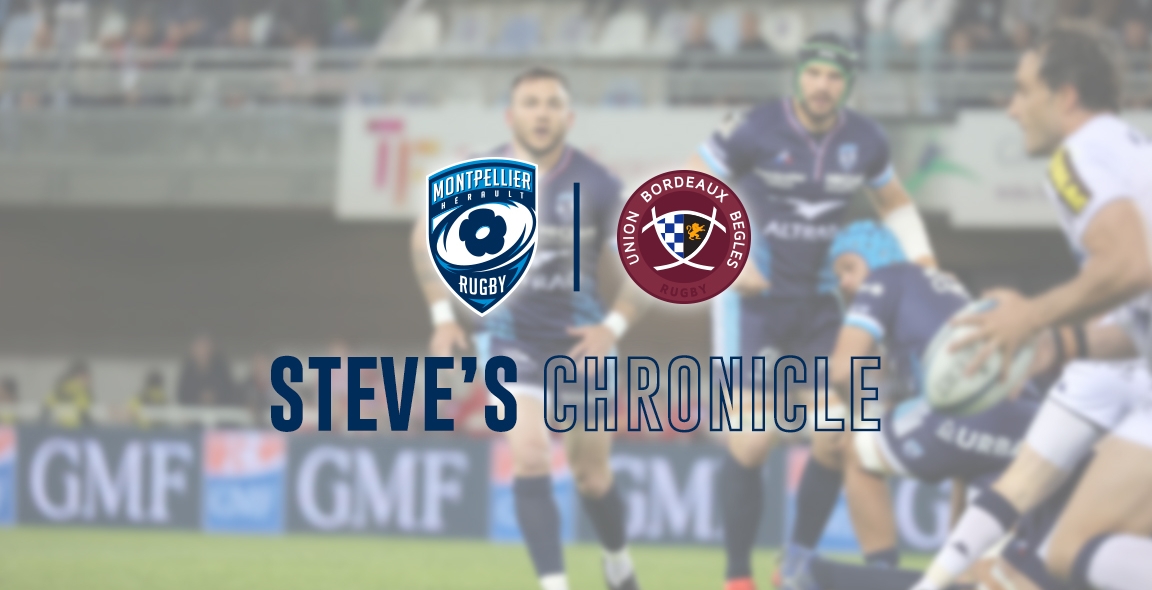 Sunday evening and the last game of day 23, Championship leaders Montpellier v Bordeaux 2nd in this season’s TOP 14, 5pts the difference between the two teams, so everything is set for one massive game of rugby, and to add a little more spice to the game, ex MHR players Louis Picamoles and Francois Trinh-Duc were making their last visit to their old club before hanging up their boots at the end of the season, the situation was exactly the same for good friend of many seasons, Fulgence Quedraogo who was on the bench but would be taking part sometime in the second half. Montpellier showed their sporting spirit to allow the two former players to enter the Stadium on their own amid a massive reception from all and sundry. The stadium was packed jam full as everyone young and old was there to see this very epic encounter.

The game got underway and it was Montpellier first on the score board with a penalty from Paolo Garbisi after only 4mins. that was quickly evened out by Lamothe who gathered the ball on the halfway line scampered at incredible speed for a hooker and dived in the corner for the first try of the game, the extras were missed by Luca and Bordeaux had a slender lead 3-5.

The game so far was about 2 very strong defences but the visitors Bordeaux looked dangerous every time they had ball in hand, they had laid down the gauntlet and was the stronger of the 2 teams.

Bordeaux applied the pressure throughout the first 40mins and Montpellier when they did get the ball they often broke the opposition defence only to kick away aimlessly the ball with no results whatsoever, if you add the handling errors and some bad choices this was not the greatest 40mins. by the team leading this season’s TOP 14. Bordeaux added 3 penalties in the first half and when the ref called for the break they had a 3-14 lead, nothing could be said they were by far the better team on the park for the first 40mins.

There would be some very harsh words in the Montpellier changing room from PSA, but they were well deserved the boys had completely missed their presentation in the first 40.

Second half was started and Montpellier were only 11pts behind not impossible but they would have to pull their socks up if a victory was going to happen.

The massive crowd, a full house was declared before the match, got behind the boys and it seemed to work, little by little they got back into the game and started to reduce their deficit, they started to work as a unit and the forwards advanced metre by metre, Garbisi added a penalty 6-14 but that was quickly evened out by another Luca penalty 6-17. Handre Pollard entered the scene and passed two good penalty kicks for Montpellier 12-17, the second one following a yellow card for Diaby who was lucky to only see yellow when red could have been the colour after a massive high tackle on Anthony Bouthier who was floored for several minutes, needing some serious attention from the medics. Montpellier continued their attack and came close on several occasions but a water tight Bordeaux defence kept the try line virgin.

Pollard passed another penalty to reduce the score to15-17, but Luca did exactly the same and the score 15-20 still only 5 pts. behind, Montpellier attacked once again through their forwards and finally after a series of pick and go’s it was Verhaeghe who had the pigskin over the line, Pollard passed the extras and Montpellier had their noses in front with just 4 mins. left on the clock.

Could Montpellier hang on to their 2pts lead, unfortunately the answer was no a penalty in the dying minutes of the game gave Luca the chance of victory, he kicked the penalty straight through the sticks and that was that!!! Final score 22-23, a game of 2 halves Bordeaux deserved their first half lead they were the better team on the park, but Montpellier came back at them in the second half and nearly did a highway robbery job on them but it was not to be.

The good news is Montpellier are still top of this season’s TOP 14 but only a tiny 2pts separates them from 2nd place Bordeaux with several teams all on their tails for those 6 play off places.

Three games left Lyon and Clermont away and Racing at home, probably 2 wins are needed to be in an automatic semi final place, but nothing is guaranteed.