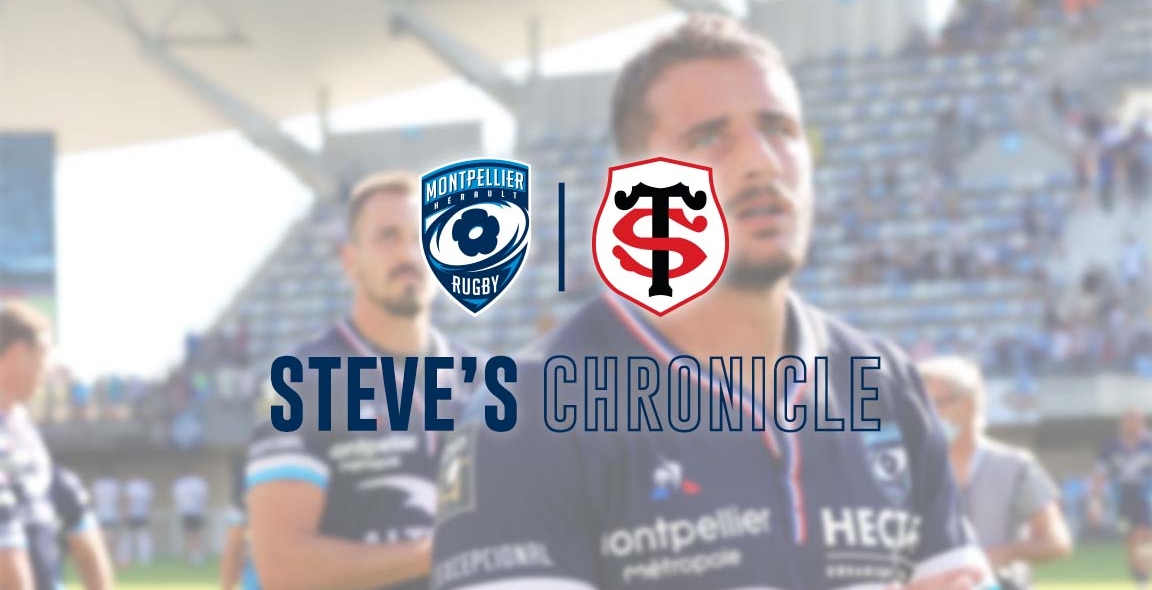 Present Champions of France and the Bouclier de Brennus, also Euro Champions Cup holders, Toulouse are as always a massive task home or away and this Sat. afternoon they are the opposition for Montpellier, looking to achieve their 2nd home win after their victory last weekend v Brive, and remain unbeaten in this new season. Toulouse as always bring a star studded team with buckets of present and past Internationals either starting or on the bench.

The weather was excellent hot with a strong breeze blowing from left to right with clouds arriving later in the second half.

The game got under away and the start was disastrous for Montpellier, Toulouse attacked from the kick off, a maul on the 5mts. line for Toulouse the ball came out Dupont, Ramos then Bonneval and finally Ntamack collect and over in the hallowed ground, Ramos added the extras and after exactly 1min. on the clock Toulouse were 0-7 to the good.

Montpellier did not panic after this first score and tried their best by playing attacking rugby, however Toulouse are probably the best attacking team in the TOP 14 and also they have one of the best defences which put a stop to many of the Montpellier attacks, plus some awful handling errors did not help their cause. Montpellier also lost their scrum half Gela Aprasidze after only 15mins. with a shoulder injury, he was replaced by the young Martin Doan who probably thought that he may get the last 10mins. or so of this encounter.

Eventually Montpellier opened the scoreboard with a penalty in front of the sticks from new singing Paolo Garbisi his first showing of the season for his new team 3-7.

Toulouse continued to play their fast and furious attacking game the ball switching left, right, and left again with the speed of light, Montpellier however did defend well and closed out most opportunities but some were very close to their try line when the players were eventually brought to ground. After a very fast first half where Montpellier tried their very best to keep Toulouse at bay the Ref blew for the break the score 3-7 to the visitors.

The second half got underway and as in the first Toulouse attacked ball in hand looking dangerous on every occasion they had the pigskin. 9mins into the second half and Toulouse got their second try through Lucas Tauzin, quick ball from the maul the three quarters attacked and over the line they went, the honours for Tauzin, Ramos added the extras for Toulouse, and the break was made 3-14.

The game flowed and both teams played some good rugby, but some silly errors kept Montpellier from scoring, there was also the Toulouse defence which looked pretty watertight, 63rd Ramos added another penalty to move the score onto 3-17 and things were starting to look bleak for the hosts.

Finally Montpellier had their first try of the game, good work from Vincent Rattez took the ball forward, Jan Serfontein progressed, the young Martin Doan supported well and with a couple of excellent hand offs he scampered over the line for his first TOP 14 try in his first season playing with the big boys, Paolo Garbisi added the extras and Montpellier were back in the game 10-17.

With just 10mins left on the clock Montpellier found new strength and energy, they still thought they could salvage something from this game. The Ref yellow carded the prop Tafili but they were short of a replacement prop because of injury so with the carence ruling they were down to 13 and just 5mins left on the clock, so simulated scrums would be the order of the day till the final whistle. The score did come for Montpellier a long pass from Paolo Garbisi and Rattez went over in the corner, conversion for the draw but the extras were missed 15-17. Toulouse played their forwards for the last few mins. and finally the siren sounded for the end of the game, a game that Montpellier could have earned the draw or even won, but it was not to be. In those final few mins. Toulouse showed why they are Toulouse ice cool under pressure with no mistakes, Montpellier could learn from this defeat, but they did have that all important defence bonus point, something many teams this season will leave without playing Toulouse, so all was not lost today.

The boys did play well under extreme pressure but far too many mistakes against a team of quality, but that bonus point could be extremely important come end of season.

Congrats to the young Martin Doan who did his level best, a player of little experience in this battle of giants and the Montpellier defence did perform well but again more work needs to be done and the mistakes have to be eradicated from the game if Montpellier want to move forward towards that eventual top 6 qualification.

Next week the boys are off to Pau for another tough encounter but there are no more easy games in today’s modern TOP 14.