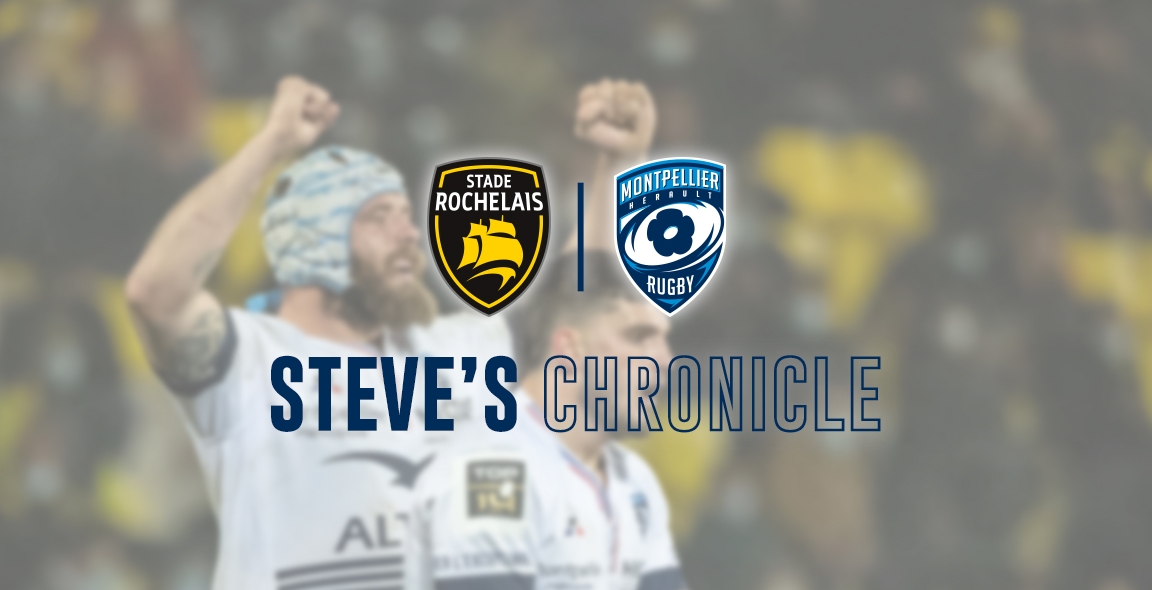 La Rochelle has never been a happy hunting ground for Montpellier, in fact it’s 17years since they had success and that was in the old Pro D2 days, sometimes losing in the last play of the game and often the points difference being more than a few.

The team is lying 4th just behind Castres with a couple of Covid cancellation matches in hand, but they are tough ones Toulouse and Toulon, to be played during the break for the 6 Nations, slight advantage for Montpellier v Toulouse as they will have many of their Internationals present for this competition.

The game got underway and from the off it was Montpelier who defended, as La Rochelle had most of the ball and they used it well. Time after time the ball was passed between several hands and always with forward movement; the boys did well to keep their try line undamaged.

The first score of the game came in the 8th min. when West knocked over the first penalty of the game 3-0 to the hosts. Paolo Garbisi was not on target for his first penalty attempt which is very unusual for this N°10 of great precision, but all came good in the 23rd min. when a quick played touch with Zac Mercer and Corbus Reinach saw the scrum half scamper down the touch line and into the hallowed ground, the extras were added by Garbisi and the score 3-7. Minutes later it was the turn of the hosts to attack and after a video by the ref Leyds was awarded the try in the corner, a magnificent transformation from West right on the touch line and La Rochelle were back in front 10-7.

The game continued with plenty for the supporters to see but it was mainly La Rochelle who had the ball, but when Montpellier did get possession they used it well and attacked with their pack who was dominating up front. On the stroke of half time the Montpellier forwards used a penalty to attack the Maritime try line and after numerous assaults they propelled Alex Becognee into the hallowed ground, and Garbisi added the extras. Paolo Garbisi took another 3pts. with a drop goal and Montpellier took a well earned half time lead back to the changing rooms 10-17.

All to play for with Montpellier in a position that they have rarely encountered at La Rochelle, a 7pts lead and 40mins to keep it.

Early into the second half West added another 3pts penalty from in front of the sticks 13-17 but Montpellier were holding their own with the forwards using force, power, and aggression in all areas of the park, the backs did their duties with some excellent defending with Jan Serfontein leading the tackle count.

Another West penalty and La Rochelle were within a tiny single point of Montpellier 16-17, this game looked as it was going to the wire both teams attacked at different moments but the defences held strong, there was some jittery moments for both teams.

66th min. and again Montpellier was on the 5mts line they battered and battered, until finally Mickael Capelli with his 130kgs bashed his way over the line, extras added by Garbisi and Montpellier has a 16-24 lead.

Montpellier continued to attack at ever chance, Gela Aprasidze used his guile and skill to take everyone by surprise from a touch won by his forwards he darted off on his run, chip kicked and just got his hand on the ball to ground his magnificent try, the extras were missed but the lead now 16-29 with just 10mins left on the clock.

La Rochelle did score again Leyds with his second try, after good work from his forwards, the extras were added and the score 23-29 with just 5mins left on the clock.

From the kick off it was all La Rochelle but the boys defended like lions and kept them out until a knock on ended the game and a huge cheer from staff and players as they has an amazing 4pts in the pocket and a victory after 17years of defeats.

The Pack was incredible and they deserved the Man of the Match award as one single unit, Capelli, Camara as Captain, and Becognee took the lime light while the backs played their part in the game and their defence also deserves mention.

With Toulouse losing at home to Racing, Montpellier are firmly in second position with 2 games in hand, Next week Pau are the opponents  and Montpellier need to continue their success and make this the 8th victory on the roll to keep them in a cemented place of potential Champions.