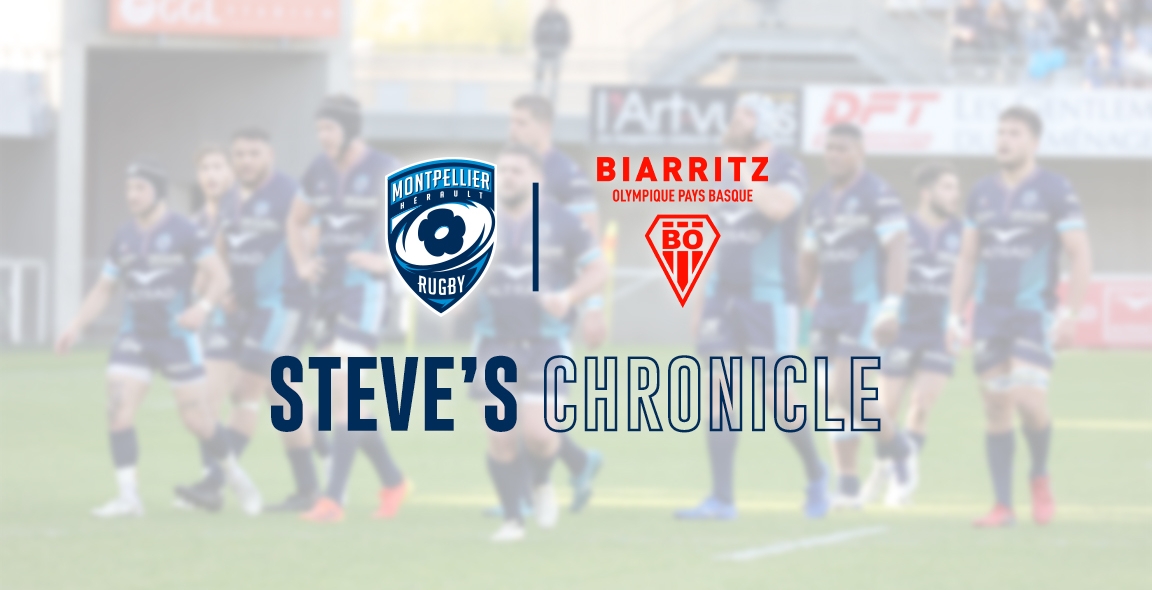 Saturday afternoon with near perfect conditions Montpellier host the visit of Biarritz, who are at the moment in 14th place  in this season’s TOP 14, while Montpellier are leading the championship with a 2pts clear advantage over Bordeaux.

Positions do not always matter in these games, Many will remember a couple of seasons ago when USAP came to play not having won game all season and they walked away from Montpellier with a resounding victory, so respect is the name of the game today, first the victory then if possible go looking for the bonus point, but to consolidate our No.1 spot victory is the most important.

The game got underway and it was Biarritz who had absolutely nothing to loose, attacking from the off, and it was ex Montpellierian Artru who darted down his wing served O’Callaghan and the first try of the game with just 4mins. on the clock, Bosch added the extras and Biarritz was 0-7 to the good. Minutes later the very same added a penalty which increased their lead to 0-10.

This was not a great start from the hosts they made error after error bad handling and some atrocious choices when much better ones were available. Paul Willemse Capt. for the day started the come back with a typical forwards try from 5mts. out he received the ball and crashed over for Montpellier’s first score of the game, Louis Forsans added the extras and Montpellier were back in the game 7-10.

The game continued but Biarritz were on fire and they continued their attack on the Montpellier try line, this paid dividends in the 25th min when after some good work from their forwards Peyresblanques crashed over from 5mts, Bosch again added the extras and Biarritz were again commanding a 10pts lead, 7-17.

Montpellier progressed down the park and Gela Aprasidze collected the ball from a ruck, he side stepped several defenders and gave the ball to Gaby Ngandebe who dived over in the corner to get the hosts 2nd try, the extras were added by Louis Forsans again Montpellier were only 3pts adrift

14-17, with just 10mins. before half time Montpellier needed to keep the visitors from scoring, but Biarritz had other thoughts in mind and just before the siren D’Hirigoyen crashed over, the extras were missed and the players left the park with Biarritz leading 14-22.

The coaches would have something to say at half time as this was 40mins of errors and bad choices from Montpellier, let’s hope they mend their ways and put this match to bed in the remaining 40mins.

The second half got underway and it was clear that words had been spoken during the break and Montpellier started to play a more disciplined game of rugby, the errors were rare and the pack played as a unit instead of 8 individuals. It was not long before this paid off, again it was Capt Paul Willemse who crashed over for his second try, the extras were added by Louis Forsans who 2mins. later added another penalty to give Montpellier the lead for the first time in the game 24-22.

Louis Forsans added another couple of penalties to take Montpellier’s lead to 30-22 with just 7mins left on the clock. The final try was scored by Kelian Galletier, who charged down a clearance kick then hacked the ball over the line and was first to dive on the pigskin, the extras were added by Louis Forsans and the score moved onto 37-22. The ref heard the siren and brought an end to the game with Montpellier scoring a 23-0 in the second half, a game of 2 halves, the second being by far the better, what ever was said at half time by PSA obviously worked giving Montpellier the 4pts they needed to stay leaders of this season’s TOP 14.

Man of the Match had to be given to Paul Willemse for his first leadership and the brace of tries he scored, he played his skin out in the 6 Nations for France and this great form hopefully will continue till the end of the season.

Next week the boys are away to USAP, which will be a very tough derby game but if they play as they did in the second half 4points could be possible.