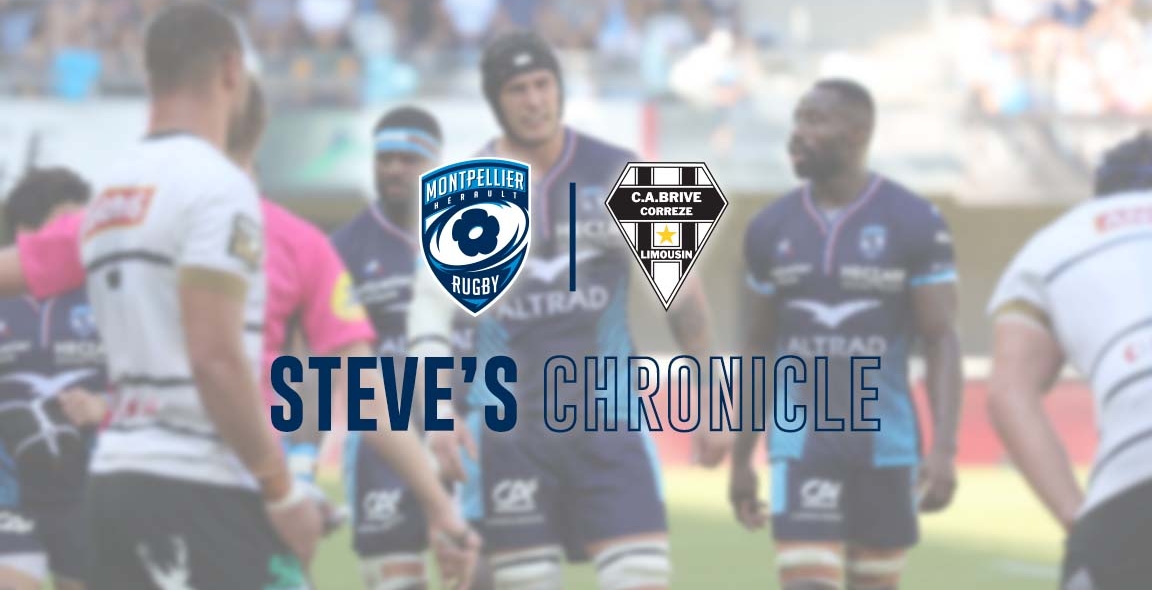 First home game of the new season, and a massive thank you to our President Mohed Altrad, for inviting all supporters and spectators free of charge, for this TOP 14 game v Brive.

The Brive team selected looked more like a Montpellier seconds with 5starters and one player on the bench plus all former players with the club, also an ex Montpellier / Georgian, Goderdzi Shvelidze as the Brive forwards coach.

The game got underway in front of a capacity crowd of around 15,000 who for the first time in ages were able to get behind their team to encourage and cheer on their heroes, let’s hope we have seen the last of anymore Covid monstrosities.

It was not long before Montpellier started to move the score board forward, after only 2mins.a line out on the Brave 22 and Jeremie Maurouard came out of the maul slipped the ball to the young Gela Aprasidze who scampered over unopposed, the extras were added by  Louis Foursans and 7-0 for the hosts. The very same Louis added a penalty nine minutes later to give the hosts a 10-0 lead, this looked a very promising start for Montpellier.

Brave had a try disallowed but from the penalty they also showed strength in their forwards and it was Peniami Narisia who went to the ground over the line, two tries and both hookers on the try list, the score moved onto 10-5 as the extras were missed by Stuart Folding. Most of the faults were coming from Brive and after another penalty Montpellier went for the touch and lineout, the ball was well won and after a maul which moved quickly forward, Jeremie Maurouard to score his first try for his new club 15-5, I’m sure there will be many more if the forwards keep this domination in the scrums and mauls, reminders of the days of Jake White and our beloved South African forwards.

With 2 tries scored in the first 20mins the bonus point looked like a feasible task today, as long as everybody kept their heads and played as a team and no white line fever came into the game it all seemed very possible. As the weather was more than warm the ref had water breaks introduced after 20mins in both halves.

Louis Foursans knocked over another penalty to advance the score to 18-5 and Montpellier looked to be on their way to a convincing win, Geoffrey Doumayrou added another in the 36mins after a great steal from Masivesi Dakuwaqa, another new signing for the club who looks to be very strong around the rucks and mauls. Just before half time Arthur Vincent got onto the score sheet, a chip kick for himself and over he went the extras were added by Louis Foursans and Montpellier went to the break with a 32-5 lead.

The second half got underway and with the match moreorless won, the bonus point in the pocket, Montpellier had to remember this was still a team game and not individuals all trying to score from any where on the park. Of course this started to become evident and Brive quickly scored Sevanaia Galala going into the hallowed ground after good work from Joris Jurand, Olding added the extras and Montpellier had already lost their bonus point 32-12.

Whether it was he heat or a lapse of concentration Montpellier went off the boil and started to let penalties and mistakes creep into the game, they needed to grasp hold of the game and become more dominate as the all important bonus point needed to be regained.

After another penalty and the touch found near the Brive try line, the ball was won and after an advancing maul the ball came out Jan Serfontein, advanced, Enzo Forletta gave the pigskin to Jeremie Maurouard who went over for his second try of the game, Louis Foursans added the extras an the onus point was regained 39-12.

Montpellier had a try disallowed by Thomas Darmon after the ref referred to the video, this maybe gave the boys a lapse in concentration and allowed Brive to score Vano Karkadaze to go over, the extras were missed by Stuart Olding, 39-17, but this also denied Montpellier of their bonus point.

The game came to an end quickly afterwards with no more scores, but the sour point for Montpellier was the loss of that all important bonus point, every game this season will be tough and lets hope that this point does not damage their progress.

Our 2 Fijians Masivesi Dakuwaqa and Jos Vici both showed both strength and guile throughout the game using the ball with intelligence, Zach Mercer was once again excellent with ball in hand breaking numerous tackles.

If there is any criticism, maybe a lack of concentration in the second half, far too many handling errors, but winning is all important and that was well done by both forwards and backs.

Next Sat. ko.17.00 it’s Toulouse at home, the concentration will have to move up a couple of levels as Toulouse are the form team already this season, they gave proof of that last night with a resounding 41-10 victory over Toulon  BEWARE!!!