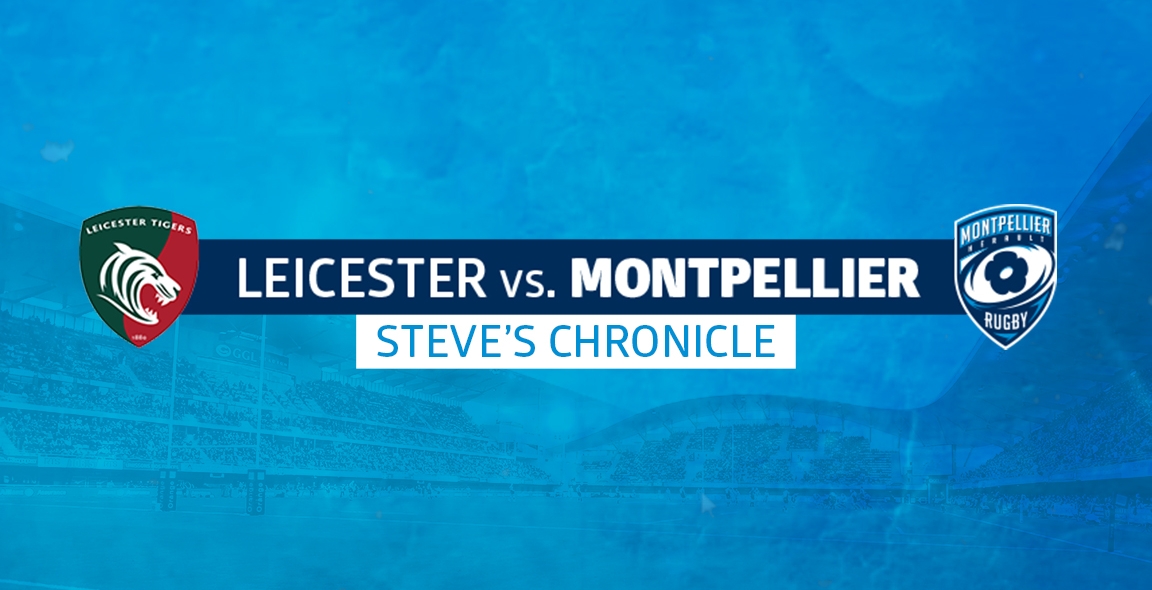 This season after a disastrous start and relegation from the Champions Cup into the Challenge Cup, this has surely helped the cause for Montpellier, they were loosing games left right and centre, games they should have won, then the boys knuckled down and progressed into the Challenge Cup final after a brilliant win in Bath in the semis, their opponents Leicester Tigers, who have been know for decades, their powerful scrum and dominate forwards in the loose right back to the days of Dino Richards.

The pundits were about even who could win this final but Finals are not won by pundits they are won by the team who has the most heart, courage and never say die attitude. Montpellier in recent games has shown this sort of temperament, could they display the same this evening in the Temple of rugby Twickenham, their only possible problem could be their discipline.

The game got underway and penalties were shared by Ford and then Benoit Paillaugue, 3-3. Montpellier’s defence was excellent, but the rolling mauls of the Tigers kept moving forward and Montpellier had little or no way of stopping them, and their discipline started to wane.
However they did score the first try of the game Anthony Bouthier made progress down the wing chip kicked and Vincent Rattez hacked the ball on and somehow got one hand on the ball under the defending full back who thought he had it covered, but the hand of Vincent Rattez grounded it in the hallowed turf of Twickenham, after minutes of video the arm was raised by Môn. Brace and the try was given, the extras were added by Benoit Paillaugue 10-3 to the boys in orange.

Alexandre Bécognée was shown yellow for the teams multiple infringements but it could have been anyone of the forwards, down to 14 just before half time against rampant Tigers was going to be no easy task. What happened then the Tigers maul became even more impressive and finally they got over the try line for their first of the game scored by Wells with the extras from Ford, 10-10 when the two teams went to the break for a well deserved rest as this was powerful stuff.

The second half got underway and again the Tigers showed their dominance up front, maul after maul which had only one gear this was fast forward! Montpellier defended with their hearts and souls, another yellow this time Capt. Guihem Guirado for more or less the same as the previous one, and of course the mauls continued until Wiese went over for their second try of the game extras added by Ford and the Tigers had a 10-17 lead the boys still had only 14 men on the park for the next 8mins.
Benoit Paillaugue added another penalty 13-17.The entered the last quarter and Gabby Ngandebe broke down his wing making excellent progress, the maul formed and quick ball was produced, Serfontein, then Bouthier who made enough yards towards the line, then the perfect pass to Johan Goosen who scampered and dived into the hallowed ground, the extras were missed 18-17 for Montpellier.

With 20mins to go Montpellier did not see much of the pigskin, but they tackled and tackled the Tigers attacked but the boys held strong, but at times it was limit, they gave everything with heart soul and some blood and guts thrown in for good measure and they held their line intact.
Finally with 2 mins. to go they got their hands on the ball, one pass go to ground again and again, Leicester could do nothing to stop this time waster done by the boys with extreme perfection, then the whistle goes for full time and the tears and celebrations could begin.
Montpellier gain their second Challenge Cup, the first in 2016 v Harlequins with Jake White, now PSA has his second his first with Sale Sharks 16yrs. ago.

Montpellier game plan was almost perfect, the discipline did let them down, but it was the Tigers game plan which was a disaster, far too many boots to ball and then the kick and chase was never on target, too high, too far, or too short, and everything thrown at Anthony Bouthier he collected and sent back with interest. Montpellier lost both Fulgence Ouedraogo (27 minuts.) then Arthur Vincent (44 minuts) both with concussion after huge tackles, but the bench played a massive part in this victory with Bismark Du Plessis doing his normal highway robbery with some excellent steals assisted by Alex Becognee who had his fair share.

Man of the Match a difficult decision it could have gone to several but the officials gave it too Johan Goosen, mine went to Jan Serfontein for his defence, Anthony Bouthier for his class act at fullback, and Benoit Paillaugue for being Benoit and finally Enzo Forletta for his 80 minuts of solid strength in all areas of the game against opposition of great strength and aptitude.

This victory should give the Boys the strength and courage to win the 2 points needed to survive and play TOP 14 rugby next season with 3 games left to play.