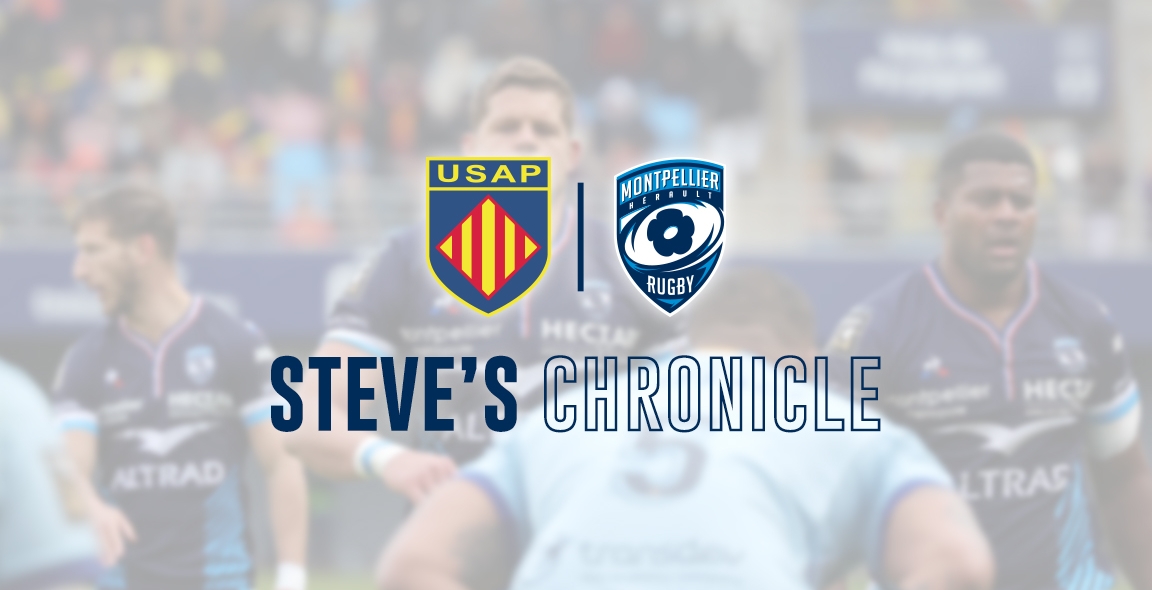 Montpellier are leading this season’s TOP 14 Championship their next opponents Perpignan who not doing as well, in fact in 13th place and struggling, but recently they have beaten Toulouse and Racing at home so utmost respect must be given to this team who are very often difficult to beat at home, they are tough competitors and the crowd are often hostile towards the visiting teams. Taking all this into consideration and the way the boys are playing at the moment this is a game that can be won and bring home a minimum of 4 points.

This weekend there is a change in the referees as next week the European matches restart so most of the men in charge of today’s games are from GB, let’s hope they at least try and communicate in French as it makes it so much easier for both teams.

The game got underway and both teams tested each other with the defences working overtime and the first score went to USAP, a Jaminet penalty after Montpellier were pinged at the scrum 3-0 for the hosts. The game was fairly scrappy and lots of mistakes were being made, in the 16th min. it looked as if Montpellier had their first try of the game, Guirado had gone over but after endless video by ref Craig Evans he decided not and Montpellier were given a 5mts scrum. Minutes later there was a suspected high tackle on Paul Willemse and off we went to the video again, after endless viewings the ref decided no high tackle that was in the 16th minute yet the game had already 30mins since the KO. if this carries on it could well be dark before the finish.

Montpellier had a penalty which was converted by Louis Forsans to level the scores at 3-3, only for this to be cancelled out by another Jaminet penalty minutes later 6-3 to the hosts.

Montpellier had been battering the USAP try line and finally Nico Van Renburg went over from close quarters with plenty of help from his forwards, the extras were added by Louis Forsans and Montpellier had a 6-10 lead and just before half time the youngster added another 3pts. to take the lead to 6-13 as the ref sent both teams to the break.

So far so good for Montpellier, yes this was not the best 40mins ever seen but hardwork and excellent defending brings results.

The second half got going and nothing much had changed from the first lots of mistakes from both teams and the two teams defended for long periods of time, this game could possibly go to the wire and there would not be many points difference at the end. Montpellier received 2 yellows one after the other first Anthony Bouthier for a high tackle then Capt. Paul Willemse followed shortly afterwards, 20 mins. at 14 on the park and a couple of minutes with just 13, this resulted in a USAP try Tedder going over for the Catalans, the extras were added by Jaminet and the scores were level 13-13.

Into the last 20mins. of the game and the Montpellier defence was holding well there were some close calls but USAP threw everything at them but the tackling was excellent and they could not get into the hallowed ground. Another attack by Perpignan and the ball was intercepted by Thomas Darmon who sprinted nearly the whole length of the park before he was brought down just short of the line, the forwards followed up and after a couple of rucks it was Nico Van Rensburg who went over for his second try of the game, the extras were added and Montpellier had a 7pts. lead with just 4mins left on the clock. Paulo Garbisi added another penalty in the dying seconds of the game to give a 10pts lead to the boys and a resounding hard earned victory 23-13. This gallant 4pts was the merit of an excellent defence the tackling was second to none and although the boys were battered and bruised they deserved their victory which keeps them in No1 spot in the TOP 14.

The next 2 weeks it’s Champions Cup rugby with a home and away game against Harlequins and a certain Marcus Smith, England’s new No10, then after that the TOP 14 restarts with a home game v Bordeaux, with just 4 games left to play a victory against this second placed team could nearly give the boys the promise of a top two finish and a passage straight into the play offs semis, but there is still water to run under the bridge before that happens.

Surely if this exchange of Refs is to carry on they should have a basic knowledge of French there are some who do make the effort like Wayne Barnes and several French Refs make the effort to speak English but to have someone who speaks no French is just complicating the issues.