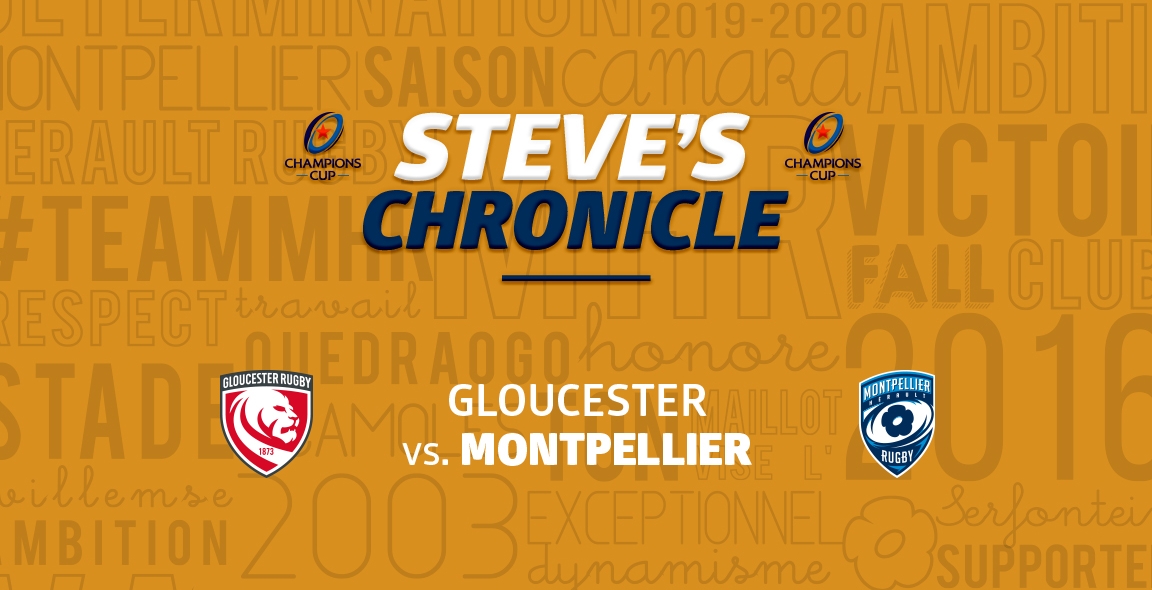 This was the 5th pool game of this season’s Champions Cup, Montpellier were already out as they had lost 3 out of 4 games and could not qualify for the quarter finals, this gave coach Xavier Garbajosa the chance to blood in some younger players and give a well deserved rest to some of the key squad players, so the team had a very different look to it but it also gave game time to players who needed it if they were to progress in their pro rugby career. Youngsters who had never been on the team sheet before like Randle, Layglon, Seille would have their first experience of Euro rugby at the highest level and Tcheishvili,  Azariashvili, Darmon, a little more game time than they have previously experienced.

The first half of this game showed that even with a new look team Montpellier could face, and stand up to an English onslaught from Gloucester, their defence was working extremely hard and well, but if you don’t score points you will always be chasing the game. They were the first on the scoreboard with a long range Francois Steyn penalty, but that was all in the first 40. Gloucester had a try from their International and Captain Heinz after a grubber kick from Serfontein was collected in the Glaws half and they went off at top speed with Heinz doing most of the work to finish near the sticks the extras were added by Twelvetrees, 7-3 to the home team. Montpellier defended well in the first half using a rush defence method this worked well but their attack was not brilliant and unfortunately defences do not score points, when the whistle went for half time Gloucester had a slender lead 7-3 and Montpellier had all to play for, if they were to get anything from this game.

The second half started with the wind behind Montpellier and if they were to gain territory it had to be used, but the field kicking was not great and the old discipline and mistakes started to creep back into Montpellier’s game. Gloucester took immediate advantage with a Twelvetrees penalty, then a Gloucester onslaught started with tries from Rees-Zammit, Morgon, and Gleave all in a 15 minut period, Twelvetrees added 2 of the conversions and Gloucester had amounted an unstoppable lead of 29-6, a solitary penalty from Darmon was Montpellier’s only contribution to the scoreboard. As the game went on the SHED ( the small touchline stand where everybody is local, vocal and standing) known throughout the Premiership and Euro rugby, repeated the famous chant Glaw-ster, Glaw-ster believing in their team and the victory. Paul Willemse came on in the 60 minut and got himself a yellow 5 minut later, but to be honest there were several players who could have been tagged after a series of 4/5 penalties with the referee finally saying “anymore infringements and the next will be yellow.” He stuck to his word and Willemse was given 10 minuts in the bin, which of course did not help Montpellier’s plight as Gloucester were becoming more and more rampant with their attacks. The defence did holdout and there was no more points for either team with the final score Gloucester 29 Montpellier 6.

Injuries to Guillamon, Bardy, and Immelman did not help Montpellier’s cause but that’s how it rolls sometimes, but it does mean that Xavier Garbajosa will have some difficult decisions to make as far as the front row is concerned for his selection next Sunday 19th January ko. 16:15 vs Connacht. There will be a line drawn through Montpellier’s Champions Cup performance this season as it was barely non-existent, the only hope is victory next week vs Connacht in the last pool game and the privilege of moving of the bottom pool place, this can only be done with a victory and Connacht score zero points. Pride is the main agenda when situations like this arise, and also to show the supporters that even after non qualification Montpellier is not going roll over and die at on their home ground. Tuesday 14 January there will be training open to the public on the training ground Eric Bechu at 15:00 which will give all an extra post Christmas present to see their favourite players on show, well those who are not injured as the list is starting to get longer and longer. A very warm welcome to Jean Baptiste Ellisade, ex French International coach and former scrum half, who has replaced Ian Vass, hoping his knowledge and competivity will help Montpellier to that first coveted Bouclier which they are still searching for.