NEAR PERFECTION FOR 51 MINUTES 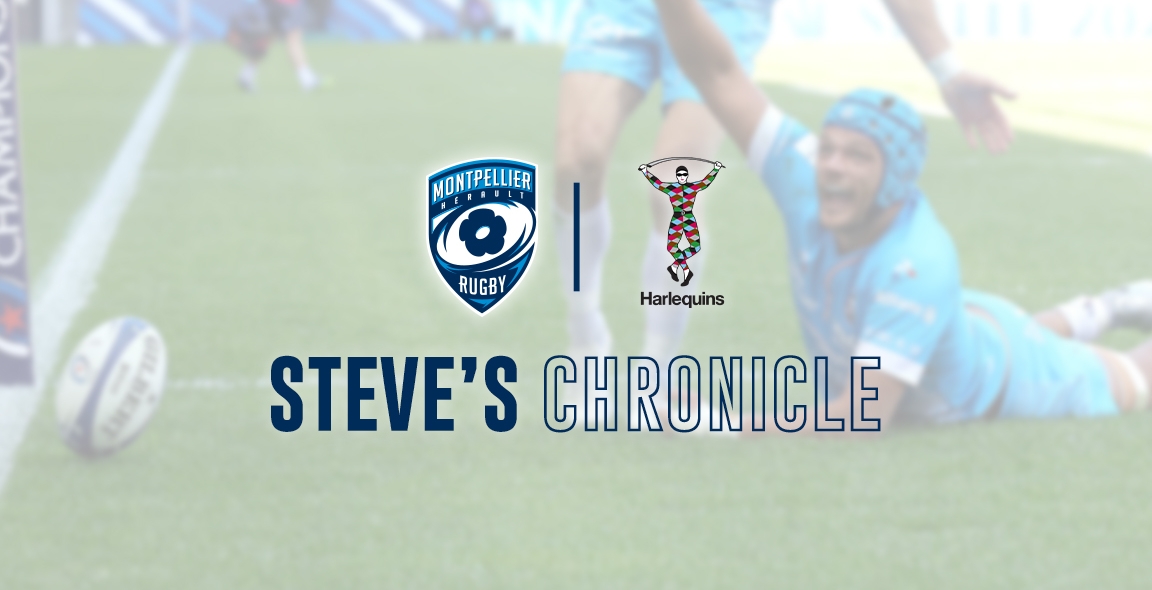 Champions Cup is back and the visitors this Sunday afternoon are London Harlequins in this home and away qualifier for the quarter finals, Montpellier have not reached this stage of the competition for just about 10years when they lost to Clermont 36-14 in the 2012/13 season.

Both teams are know to run the ball from anywhere on the park so a great running rugby game could entertain a very good crowd on this bright sunny Sunday afternoon.

The game got underway and from the straight both teams tried to play some good running rugby but it was Montpellier who looked the stronger of the two teams, their defences were both working overtime and although there were some good breaks both try lines stayed intact for the first 20mins. Gaby Ngandebe was the first on the score board, he gathered a ball messed by the Quins backs and scampered all the way into the hallowed ground for the first score of the game, Paolo Garbisi added the extras and Montpellier were 7-0 to the good.

Montpellier were playing well ball in hand and were giving the Quins allsorts of problems defending, and the second try came from Zach Mercer who was giving the Quins defence a multitude of problems with his strong bursts with ball in hand, the extras were again added by Garbisi and Montpellier had forged into a 14-0 lead, this looks very promising.

Minutes later a try by scrum half Corbus Reinach after some good work from Thomas Darmon the conversion hit the upright and the boys had extended their lead to 24-0 nearly to good to be true.

It did not stop there Zach Mercer got his 2nd try of the game, the play started on the 40mts line and went through several hands before Zach finished the move with an inside ball from Forletta and from that distance you do not stop Zac Mercer, Garbisi added the extra 2 pts. and Montpellier went to the break 26-0 what a first half and a score line nobody thought would be possible.

The second half resumed and again Montpellier increased their lead after only 2 mins. on the clock, this time Titi Lamositele was bundled over by his forwards, the extras were missed but the lead had stretched 31-0, Garbisi added another 3pts, 34-0 this was getting beyond believe, would Quins start playing rugby or continue to watch Montpellier score.

Harlequins are too good a team to just lye down and die, tries started to happen for the Quins the first through Hammond the extras were missed then Esterhuizen scored after his 10mins on the naughty step (yellow card) Smith passed the conversion 34-12. Further tries from Joe Marchant with the extras again by Marcus Smith and Quins were creeping ever closer to Montpellier.

A couple of penalties added by Handre Pollard and an insane interception from Louis Lynagh with conversion added brought the final score to 40-26. A game with 9 tries in all and bonus pts for both teams suggests that all will be to play for in the return match next weekend at the Stoop in London just across the road from the Temple of English rugby Twickenham.

The second half was for the Quins but some of the Montpellier defence had to be questioned especially down the wing space where there were often Boulevards of free space for the speedy Quins backs to work with. This has to be tightened up before next weekend if Montpellier is to continue in the Champions Cup. They have a 14pts advantage going into the second leg will it be enough difficult to say but if they shore up their defence anything is possible. Man of the match was given to Zach Mercer obvious choice but Nico Van Rensburg did very well in the back row.

The crowd which was full of voice from both bands of supporters certainly got value for their money with a 9try fest and some excellent rugby just a shame the lack of defence in the second half from Montpellier but I’m sure PSA will be working hard on that this week before the return fixture in London.