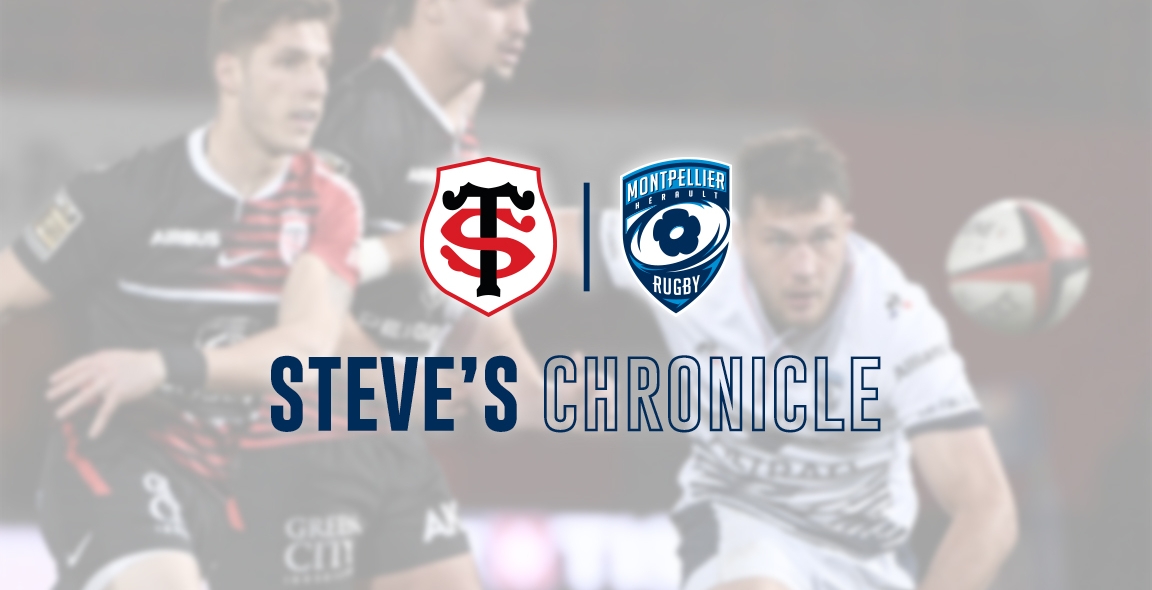 Sunday evening and a difficult game away from home the opponents the mighty Toulouse, this is the last of the Covid rearranged fixtures, so after this game all the clubs will have played 20 games. The press has been giving them a hard time recently as they have lost several games and with the 6 Nations being present for the last couple of months they have as many as 10 key players absent on 6 Nations duty. Montpellier may not have as many players on International duty but they have an injury list as long as your arm, 13 players injured and 5 on their countries duty, so PSA has given some of the less experienced players a run out on this Sunday evening.

The game could not have had a worse start for Montpellier, from the KO. the ball was carried up the park with speed for Mallia to enter the hallowed ground with just 58seconds on the clock, the extras were missed by Holmes, but that gave the hosts a very quick 5-0 lead which left the boys stunned.

The game continued and Montpellier had to do an awful lot of defending, the ball was being thrown about by Toulouse as they usually do, plus there is always someone waiting for the ball so defending is not an easy task but Montpellier seemed to just about cope with the constant attacks from Toulouse, there were some narrow and harassing moments but last ditch tackles were being made by all and everyone to keep the score sheet from getting any worse.

Montpellier had a try disallowed early on great effort from Gaby Ngandebe but the ref called for the video and saw a knock forward at the start of the action so everyone was brought back to Montpellier’s 22mts line for a scrum, shame as it was a great effort from the Montpellier winger, there were many who had their doubts over the decision.

Holmes added a first penalty for Toulouse to move the score onto 8-0 but Montpellier kept defending well to keep the damage to the smallest of limits. The problem was Montpellier did not have possession of the ball and without it it’s very difficult to get on the scoreboard, they did manage a penalty in the 19th min, thanks to Louis Forsans to reduce the difference to 8-3.

The game continued and Montpellier defended most of the time there were flashes of brilliance but no further scoring in the first half and the teams went to the break with Toulouse leading 8-3, which was an excellent result for Montpellier, if they could get their hands on the pigskin the second half could give them a chance to do something brilliant.

The second half got underway and like the first it was all Toulouse, they seemed to quicken the pace, at the breakdown the ball was released immediately and started to cause all sorts of problems for the visitors. Medard was the first on the scoreboard, then a brilliant try from the young Page Relo after the ball went through many hands before the young scrum half scampered over the line, the extras were added and Toulouse in a very short time had a commanding lead of 23-3. A moment of glory for Robert Rogers who got his first try for his club the ball was moved up the park and after good work from the forwards he crashed over the line, the extras were added by Louis Forsans and the score 23-10.

As the game continued Toulouse seemed to get stronger and holes started to appear in the Montpellier defence, further tries were added by first Tauzin then Germain, the latter was converted which brought the final score to 35-10 for Toulouse.

A very disappointing second half from the boys who did have a fair chance after the first 40mins. but as we all know the Toulouse attack can be lethal, the way they throw the ball about with always someone on the shoulder to receive it, and with the game being played at pace Montpellier lost their energy in the last 15mins and the obvious happens , holes start to appear in the defence and tries will be scored.

The good news is Montpellier are still on top of the TOP 14, small margins but as the end of season is coming closer and the play offs are on the horizon leading by a couple of points is always better than struggling to get into that top 6 play off positions. So not a great day for the boys but the season so far is excellent, and if they continue they could find themselves in automatic semi-final play off place without going through the barrages.