New year 2020 stars with a victory 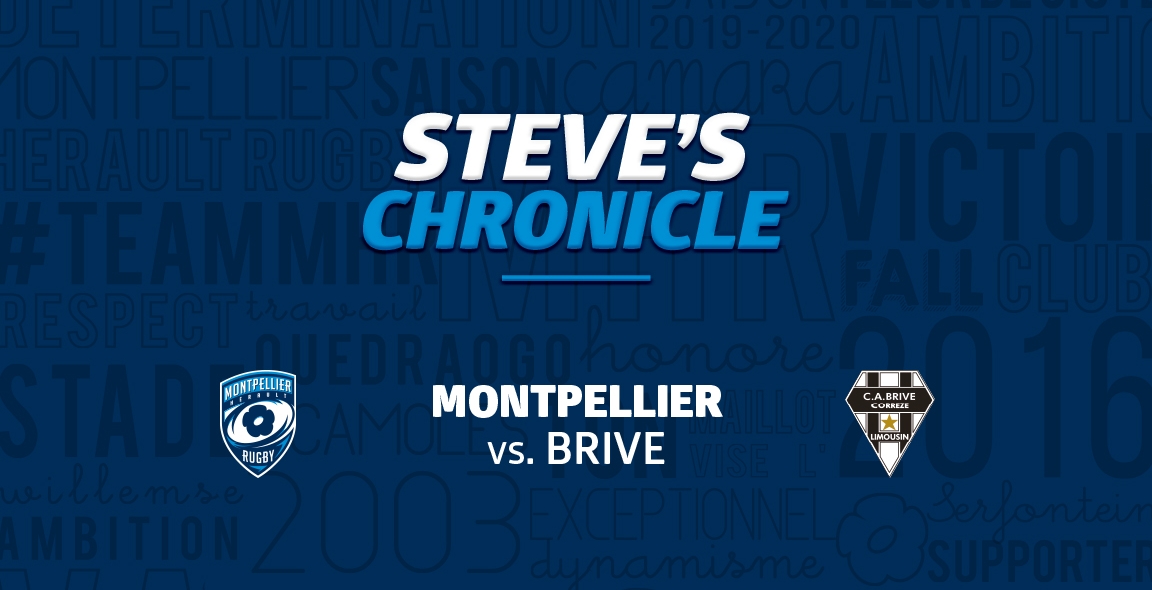 The visitors for this first game of the New Year of the new decade was Brive, in the past they have given Montpellier allsorts of problems and come away more than once with victories.

The visitors had also 3  Montpellier formed youngsters in their team, Jurand, Thomas, and Galletier, (cousin of our very own Kelian), all products of the Montpellier Academy, none had enough game time with their former club so they moved on to newer pastures where they are having regular game time and enjoying life as a Pro rugby player in the TOP 14. Montpellier coach Xavier Garbajosa had selected a strong team for this tough encounter of the first game of this New Year, bringing back Jacques Du Plessis after his long suspension at No 8, he looked lean strong and ready to show his team needs him.

The game was started by Brive who had to do an awful lot of defending in the first 20mins, but they held fast but infringed many times giving Montpellier a bucketful of penalties, and Handre Pollard obliged with 3 out 4 to give Montpellier a comfortable 9-0 lead. Brive also had a yellow for 10mins when Narisa was sent to the bin for numerous faults by his team, but honestly it could have been one of several players as the faults were flowing thick and fast, just before half time Herve got a penalty back for Brive 9-3. On the stroke of half time Montpellier lost the ball on the Brive 22, the visitors recuperated and set off at pace with a break from Blanc who tapped ahead Jurand was there to collect made good ground and passed to Scholes who bundled himself over the line, the ref had a long look at the video to see if momentum got him over the line or he was held short, then he scrambled the last mts. the video showed good and the try was awarded, the extras were added by Herve and Brive were in front 9-10. This was quickly countered by another Pollard penalty which gave Montpellier the smallest of leads as the ref blew for the break, 12-10.  The first 40mins were not great for Montpellier far too many mistakes and once again individual play took over from team efforts with far too many players trying to score on their own, this all fizzled out to nothing and the teams went to the break with Brive hanging on just 2points behind.

The second half got under way and Montpellier looked like they meant business, they again attacked and after good pressure the magical Anthony Bouthier went over after fine work from the three quarters and Jacques du Plessis who produced his umpteen break through the middle of the park, the extras were added and Montpellier had a lead 19-10. Brive had a  couple of penalties to take the score to 19-16 and stay in touch with Montpellier, any sort of mistakes could give them an opportunity to score and take the lead, but the Montpellier defence held strong. Once again as in the first half, Montpellier attacked and kept the ball for long periods of play but could not get over into the hallowed ground. Pollard knocked over another penalty to take the score to 22-10, the finishing after numerous attacks was not great, and everyone was waiting for that all important Montpellier try which could possibly seal this game to their advantage. With just 4mins left on the clock, the ball came out to Thomas Darmon after Bouthier had volleyed the ball to him and over in the corner he went, Chilachava was at the start of this play and almost scored himself, but finally some excellent teamwork got the try for Montpellier, the extras were added and Montpellier moreorless had the 4points in their pockets 29-16.

Laranjeira added another penalty in the dying mins. and Brive were far to close to a defensive bonus point, from the restart they threw caution to the wind and passed and attacked the Montpellier defence and went the entire length of the park with an excellent attack, final man over the line was Laranjeira, probably the try of the match and the idealism of never giving up, gave them a well deserved defensive bonus point with the try scorer adding the extras, final score, Montpellier 29 Brive 26. Sometimes winning ugly has to be done and this was on of those occasions, the game that Montpellier played was cluttered with far too many errors and not enough team work, BUT they came away with the win and 4pts which is of the greatest importance. It may not boost the confidence 100% but it will help, which makes Montpellier still unbeaten in 2020 and the TOP 14 at home.

Next 2 weeks sees the return of the Champions Cup, first Gloucester away then Connacht at home, all is lost in this competition, so we may well see a coach selection with a difference giving game time to some of our players who have had little or no bench time at all, and also giving the more experienced players a well earned rest for the next couple of weeks.