No scrum no win ! 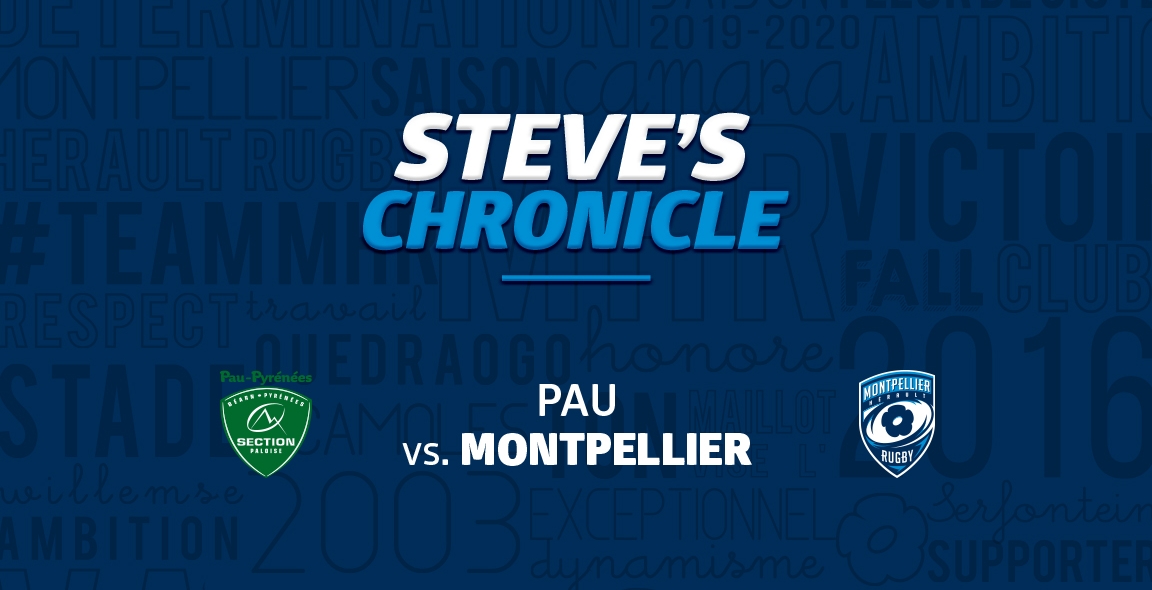 Montpellier needed points and they were off to Pau to try and get them, but Pau lying at the bottom of this season’s TOP 14 also needed points and this was never going to be an easy task. Montpellier has yet to have success away from home, will this be the occasion, there are several injuries plus our 5 Internationals who are on 6 Nations duty, the players who are available have to step up to the mark and perform that is why they are there for these sort of situations

The weather was not great for this 18.00ko. game constant rain and a swirling wind so this could well be a game where the boot is going to play a very important part. And it was exactly that in the first half ariel ping pong was used throughout the first 40mins with few attacks and plenty of errors from both teams. The penalty count was also high with both teams giving away needless points. The Montpellier scrum was under siege from the start of this game and the once dominate pack produced by the boys became a motor in constant reverse with the Pau pack shredding it to pieces. Of course the penalties started to accumulate and Montpellier gave the home side 3 very kickable ones in the first half, giving them 9pts. However Montpellier did get 2 of their own which Pollard converted to bring the half time score to 9-6. A very mundane first half where the ball was probably in the air more than in the players hands, this is not a problem usually if the kicking game is thoughtful and execution is good , but many a time it was straight into the arms of the opposition and they just returned the pigskin back to sender. The high light of the first half was probably the Honhada which is the supporters hymn when the Pau players enter onto the park at the start of each game!!! The half time score was Pau 9 Montpellier 6.

The second half got under way and it was much of the same a kicking game with sporadic running rugby, the majority of the supporters were wet and bored but this is the sort of game you will get when both teams are desperate for those all important points. As in the first half penalties were exchanged with faults flying in all directions and finally in the 55min Montpellier got the lead for the first time in the game, 12-15. They did start to look a fraction brighter but errors and player isolation put a stop to the most serious of their efforts. Pau always looked dangerous with the ball but a strong Montpellier defence kept them out with out to much trouble. The turning point in the game came in the 76th min. the ball went into touch 10mts from the Montpellier try line with the throw for the visitors, short or middle was the best option for the throw it went middle of the lineout and Vans Rensburg had it with both hands, what happened next was who knows.

It finished on the deck and of course the Pau forwards pounced onto it. Three or four minutes they pounded the Montpellier try line until finally Corato was bundled over for the only try of the game, the conversion was kicked and Pau had a 4 pts lead with only minutes to go, 19-15. The last minutes of the game saw the Pau forwards play hide and seek with the pigskin until finally the ball was hacked out of play and Pau had got them a deserved 4pts victory.

Once again Montpellier lost this game in the last few remaining minutes, not the first time this season, if you cannot sustain the pressure for the full 80mins and win, there is a huge problem somewhere. Confidence, aggression and individual mistakes are becoming a sorry sight this season away from home, valuable points that were in the teams grasp have been thrown away in the dying minutes of several games this season. The team has bucketfuls of talent which seems to be unavailable or left in the changing rooms when the boys hit the park, is the problem in their heads or even more complicated? The next 2 weeks its back to the 6 Nations, Scotland away, then Ireland in Paris, if the world threatening Coronavirus does not intervene.

The next game for Montpellier is on Sunday the 22nd of March v Racing a team who are flying at the moment having beaten La Rochelle 49-0 in Paris this weekend scoring 7 tries. If Montpellier want to qualify for the TOP 6 Playoffs they have to win this game and several more or it could well be nothing at the end of the season and Challenge Cup next season. This was also Phillip St. Andre’s first game as new director for Montpellier, I’m sure he will be certainly thinking there is work to be done and improvement in many sectors of the game, he may well have to earn his salary the hard way to turn this around before it’s too late.