ONE TINY POINT IS ALL THAT’S NEEDED. 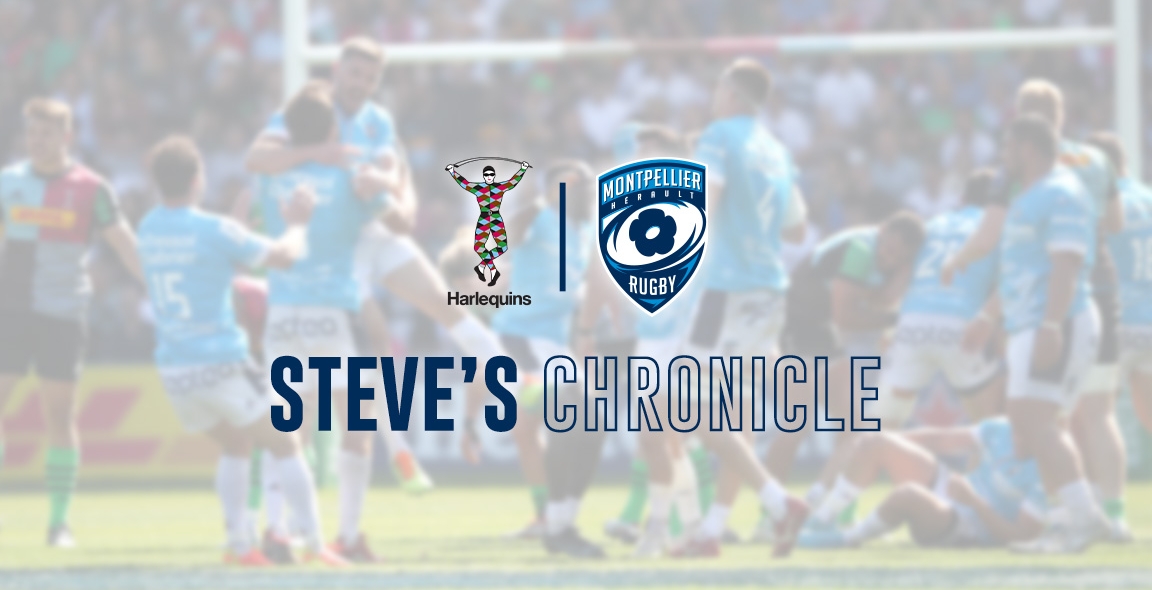 After the first leg match v Harlequins Montpellier had a 14 lead, maybe not enough but their defence is recent games have been excellent and if this continues it may be just enough.

Montpellier and PSA made in all 13 changes to the team from the first leg but that does not mean they were sending lambs to the slaughter, the club has a squad of great players and to change moreorless the entire also means they can, and still have a team worthy of representing the club.

The British press thought different and quoted; Montpellier are concentrating on the TOP 14 and not giving the Champions Cup the respect it deserves, HUMBLE PIE, and EGG ON FACE, come to mind but more about that later.

The game got underway and from the off disaster for Montpellier, Dombrandt broke the Montpellier defence and served Huw Jones on a platter and with the extras added by Marcus Smith, the 14point lead was already down to 7 with just 2mins. on the clock.

Handre Pollard missed a long range penalty but minutes later a good attack from Louis Forsans who broke the defence line handed the ball to Yvan Reilhac who burst over the line using all his strength, Louis added the extras and the lead over the 2 games again went to 14pts.

The ball was being thrown about by both teams and further tries were scored by Dombrandt and Marchant this try was started in his own half after a missed penalty touch by Pollard, Smith started his run and beat several defenders before timing his pass to perfection for Murley and over went Marchant to finish a great attacking move, could be try of the season, Smith added the extras and the score had moved onto 21-10, Montpellier were still hanging on to their aggregate lead.

At no point did the heads go down for Montpellier, they again attacked with the boys upfront, several charges by the forwards and the ball came out to Forsans and clever cross kick for Tisseron who collected and went over, the very same Louis Forsans added the extras and again Montpellier extended their aggregate lead, 21-17. Just before half time Harlequins went over in the corner Lynagh was the scorer after Dombrandt had served Quins scrum half who from the scrum he gave the last pass and Quins had their 4th try, Smith added the 2pts and the half time score was 28-17, still a 3 pts lead over the 2 games which is the important factor.

The second half got underway and the scoring from both teams quietened down, and there was actually 15 mins. of play without a point being added, but both teams did try their level best, then Pollard added a penalty for Montpellier 28-20. The Quins were causing allsorts of problems for the boys and a series of scrums on their 5mts line brought a yellow card for Maurouard and the possibility of a penalty try but the ref insisted with more scrums, finally they went over only for the ref to disallow the try for an obvious obstruction.

With just 4mins left on the clock Smith served Lynagh who went over not far from the posts which gave the Quins a 13pts lead with the extras to come, Smith lined up the extras which looked very easy for a kicker of his class, the crowd went wild as they saw the kick take off towards the sticks, they cheered for their last minute victory but the 2 touch judges saw differently and the flags stayed down the kick was just wide. The stadium fell silent bar a couple of hundred Montpellier supporters who had travelled, the last 2 mins. was ball up the jumper make 2mts ruck next forward 2 mts. and so on etc. finally the siren sounded and the ball was thumped out of play victory for the boys and they showed their joy on the park. You can win by 20pts or even 1pt. but it still counts and today Montpellier defended like lions and never stopped trying to keep that aggregate lead, they all deserved a pat on the back and a few beers to celebrate.

Marcus Smith looked sickened by his miss but that’s all about growing up, he has massive potential and this happens in Pro sport he will learn and get over it nobody is perfect.

Earlier it was mentioned about the lack of seriousness and respect by our dearest of Brit journos, yes in years gone by some teams have sent 2nd string teams to Euro cup games but this was not the case today, certain journos did state this fact in their pre match articles, after Montpellier’s victory, they may have to contact Mrs Hinch for advice on how to clean Egg from their Faces!!!

My Man of the Match award goes to the entire travelling squad and coaches, as this is only Montpellier’s second venture into the Champion Cup’s quarter finals where they will play La Rochelle away from home, another massive task for the boys.