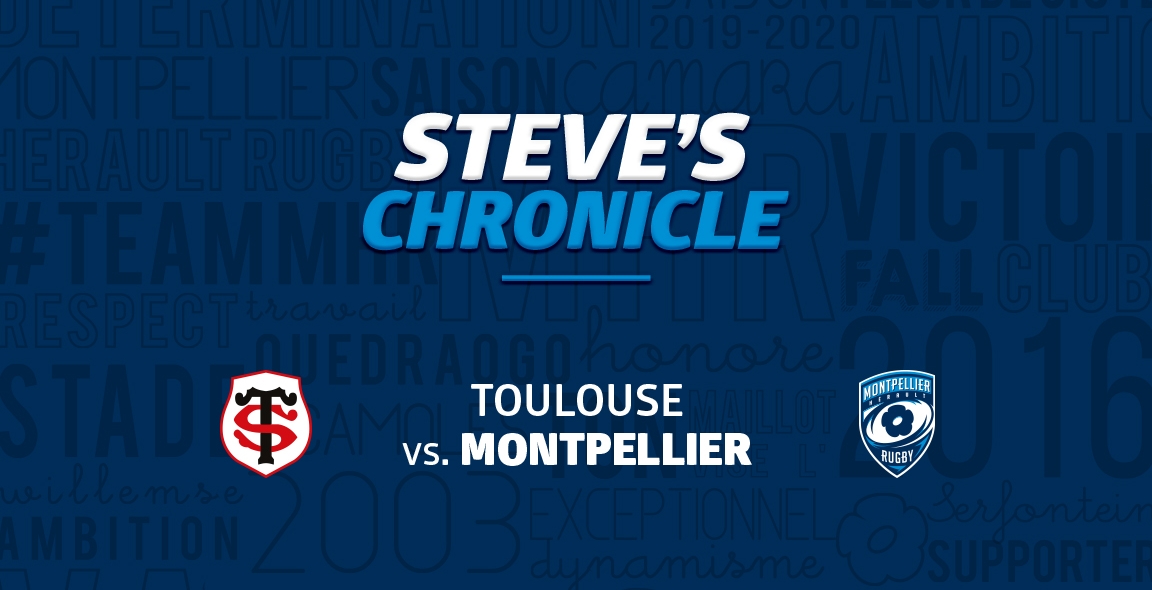 Never easy an away game at Toulouse but that was the task for Montpellier this Sunday afternoon,and after the brilliant performances of our boys selected for the French game vs Wales in Cardiff. Everybody was looking for a similar performance,but it was not to be.

There was some great play from the boys who at times completely outclassed Toulouse but they could never finish off when desperately close to the Toulouse try line, then there was the complete opposite, the missed tackles the knock-ons and some very unserious ball handling and kicking play. You cannot take on a team like Toulouse without getting moreorless 100% correct and when you have a player like Kolbe in the opposition you need to be even more aware of his possibilities.

Seven minutes into the match and Toulouse had their first try, the ball going through several hands, it finished with Holmes going over under the sticks, he added the extras himself and Toulouse was 7pts the better. Montpellier had their moments but every time they got into a decent scoring position they either lost the ball or infringed which did their cause no good at all, there was a couple of efforts that the referee went to video to see if Montpellier had scored but that was denied on each occasion, this just did not seem to be Montpellier’s day every time they tried their hardest to get into the Hallowed ground they came up short. Just before half time that man Kolbe received the ball on the wing went off at his usual break neck sped threw an almighty dummy pass which everyone present fell for and he left everyone for dead, his pass to Pages was perfect and the second try for Toulouse was on the scoreboard. The extras were missed which gave Montpellier every chance to get back into the game, the referee blew for half time with the score Toulouse 12 Montpellier 0.

The second half got under way and Montpellier had plenty of work to do if they were going to come away with anything from this game. Holmes added a penalty to take the score to 15-0 and minutes later another defensive error let Toulouse in for their third try of the game and the attacking bonus point, Pages ripped the central defence apart and galloped 30 odd meters before he give the ball to Tauzin who had a clear run in without opposition, the extras were missed again and Toulouse had a commanding 20-0 lead. Montpellier got a try back from Nadolo who received the ball 5 meters out and crashed over taking 2 or 3 players with him; La Paille added the extras and Montpellier was no longer Fanny 20-7. The bonus point for Toulouse was no longer but within a minut the point was back in Toulouse’s pocket, Montpellier threw caution to the wind and attacked from their 5 meters line the ball went through the three quarters hands, but as it got to the end of the line in stepped Lebel who will never score an easier try as when he intercepted he was already in the Hallowed ground he caught the pigskin and grounded it all in the same movement, while the Montpellier players just looked on in shock, the coaching staff’s heads went down and it was seen on all the faces that this huge mistake had given Toulouse the maximum 5 points. The extras were again missed it was not Holmes day with the boot 25-7 to Toulouse with 9 minuts left on the clock. The clock slowly wound down without any further score and this was a 5 points win for Toulouse which puts Montpellier into a very serious 8th position if they want to finish in the top 6.

After spending 25% of the game squatted on the Toulouse try line they could not manage to score which in today’s game is just not possible, if you add around a dozen knock ons and some miserable kicking from the boot, time after time players isolating themselves and then loosing the ball this was nowhere near a performance which will win hearts and score desperate points needed to advance in this seasons Championship. The confidence has to be regained if we are to get into that all important Top 6, the mistakes have to be rectified and more passion produced or the last 10 Championship games could be difficult as there is some very tough opposition in the next few weeks and months.

Next week the boys are again away from home the venue is Pau who are desperately looking for points to stay in the TOP 14 as they are in joint last place with Stade Francais and Pau is never an easy place to win.

Congratulations to the French team who scored an impressive win in Cardiff on Saturday vs Wales, their first for many a year, and Montpellier had 2 try scorers Anthony Bouthier and Paul Willemse, plus Momo Haouas and Arthur Vincent both had excellent performances, nothing is ever certain but all four will probably be on the team sheet for the next match away in Scotland.

Gaby Ngandebe was amongst the named reservists, he played an extensive role in the after match celebrations, his chance will probably come sooner than later.