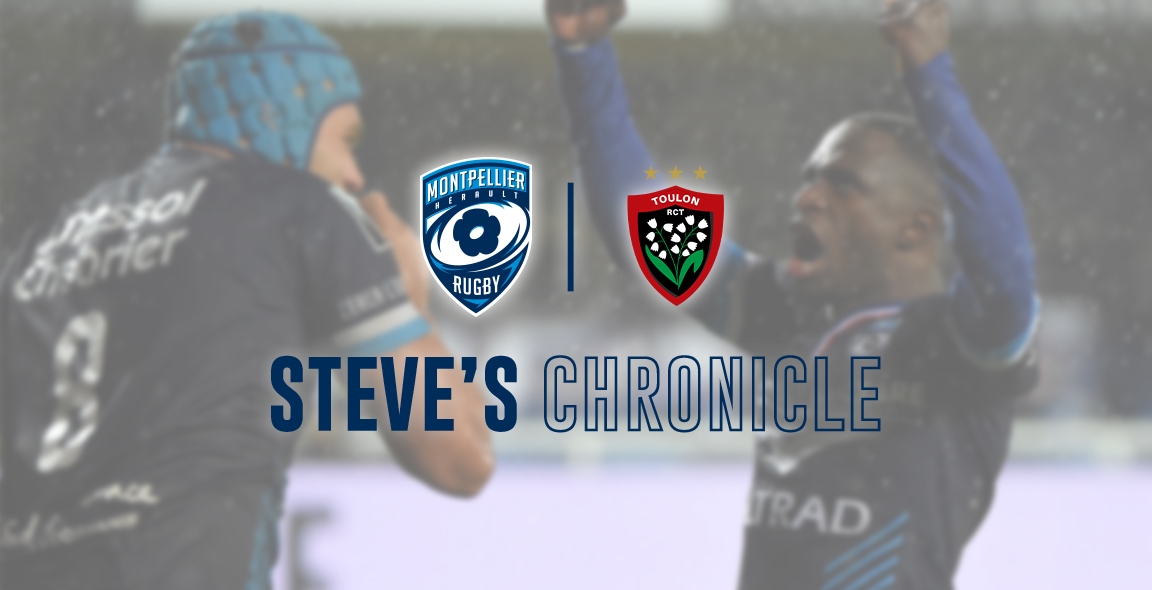 Toulon were the visitors for this rearranged Covid fixture, but the weather was atrocious, constant heavy rain had been falling all day in Montpellier and was not going to stop for this important game. The very thought of trying to play a game of rugby in these conditions was almost impossible. Both teams did not have a choice and this was going to be an evening of kicks and mistakes. Montpellier were missing a bucketful of players: some on International duty and the rest either injured or given some breathing space, but if the boys could win this game they would be sitting in top spot as leaders of this season’s TOP 14, 3 or 4pts in front of leaders Bordeaux.

The game got underway, handling was virtually impossible and both teams adapted to box kicking and long down field kicks to move both teams up and down the park. Rugby in its normal sense could not be played as the rain was teeming down for the whole game, but Montpellier had their young goal kicker Louis Foursans on hand to knock over any penalty that would be awarded ; he did missing just one and passing 6 in total for a personnel tally of 18pts, giving his team a 18-16 pts victory, while Belleau of Toulon could only master 3 penalties.

They did get a most bizarre penalty try with just 7mins left on the clock, what looked a blatant obstruction of 2 of Montpellier’s defenders and Anthony Bouthier who put boot to ball at the same time as the ball was grounded which resulted in a yellow for him and Montpellier finishing the game with 14 players on the park, the ref Laurent Cardona reviewed the video an eternity of times before he made his decision, he awarded the try much to the protest of several of the Montpellier players which brought the score to 18-16.

Just 6 mins on the clock and 14 on the park, there was some serious defending to do as Toulon sensed that they could squeeze a victory from the jaws of defeat, Montpellier defended like lions putting their bodies on the line time and time again.

In the dying seconds of the game, Toulon were awarded a penalty just inside the Montpellier half moreorless in front of the sticks,. Would they go for goal or take a touch line penalty? They decided the former but the attempt was well short and off target. The ball went dead and as the siren had already sounded, the game was over and the victory was Montpellier’s: 18-16.

A game that will be remembered for the victory that is certain, the sad point of seeing Jan Serfontein stretchered off after a massive clash of heads and could well be missing for the next few games which would be an important loss in the Montpellier back line as we all know he is always Mister 100%.

Montpellier are now sitting pretty in first place of this season’s TOP 14 but Sunday evening, there is a certain Clermont v Bordeaux, a victory by the visitors would let them regain their 1st place. The victory for Bordeaux did not happen; they earned a bonus defensive point after going down 29-26 which gives Montpellier a 2pts advantage over second place Bordeaux. Next Saturday, Montpellier will play their second rearranged Covid game away to Toulouse. There will be many Toulouse players absent as the final 6 Nations game v England takes place so Montpellier will have a fighting chance to take at least 4pts and extend their lead in the TOP 14, but we all know Toulouse are a form team with loads of great players even when they are the biggest suppliers of guys for the National team. But if you want to beat them, there is no better time than the present, they have lost a bit of form and missing key players. The only hope is better weather than the Toulon game which was an impossibility as far as playing any decent rugby was concerned.