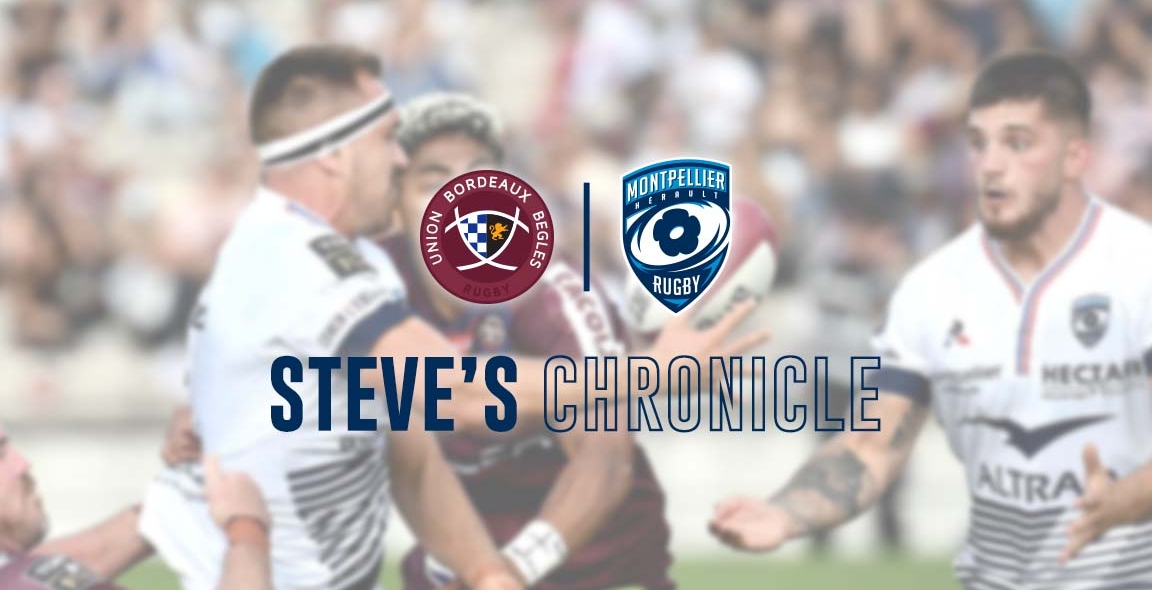 This weekend the boys had a difficult game away to Bordeaux Bègles, a team that is improving year on year, led by the often outspoken but very successful Mon.Christophe Urios, who has had success leading former clubs Oyonnax to promotion, Castres to French Champions and now Bordeaux who are challenging for more honours and lying in 2nd place in this season’s championship.

PSA made 9 changes from the previous week giving some of the uncapped and younger players a chance to shine, Cobus Reinach was back from International duties in South Africa and straight back into his position of scrum half.

The game got underway in pleasant sunshine with little or no wind, from the off it was all Bordeaux, and after only 4mins. they were on the scoreboard with a try from Hulleu, the ball was quickly dispatched through several hands and over the winger went moreorless unopposed, the extras were missed, not the greatest of starts from Montpellier but there was still plenty of time left on the clock.

Paulo Garbisi got the scoreboard moving for Montpellier with a penalty in front of the sticks, but minutes later they were further behind after an excellent rolling maul a la Bordelaise, with big Ben Tameifuna going over and nobody takes the ball off this huge prop, this time Jalibert passed the conversion, 12-3 after only 18 minuts.

Garbisi got another penalty back for Montpellier but the action was all Bordeaux and the boys had to defend for long periods of time, this they did well, but wave after wave of attacks and the wall crumbled again this time it was Ben Lam who made the break and Seuteni finished it off, again Jalibert missed the conversion but Bordeaux had created a strong lead 20-6, finally the ref blew for the break and there would be some serious talking from PSA as Montpellier had shown little or nothing in the way of counter attacks, and would have to pull their socks up if they were to get anything from this game.

The second half got underway and it was from bad to worse for the boys another try this time it was Lamothe who scored with the conversion from Jalibert, Bordeaux had a massive lead of 27-6 and of course the attacking bonus point well and truly in their pockets. The bench players started to come onto the park and this did help Montpellier’s cause, Masivesi Dakawaqua got a try back for the boys plus the extras from Garbisi, 27-13. For reasons unknown to man, Bordeaux started to lose their grip on the game and another Montpellier try, this time the ball went through a series of hands before Anthony Bouthier sidestepped his way over the line, the extras were added  and Montpellier were within 7pts. of their hosts 27-20. The game had gone completely towards Montpellier and it was the hosts who had to defend with their lives on the line, several times Montpellier came so close to anther try but either lost the ball or was stopped inches short of the line.

Bordeaux had a yellow card for repeated faults in the 67th minut. but Montpellier could not take advantage of the 14 vs 15 numbers as Poirot returned after his 10mins. in the bin, they received another this time Dubie but there was only 2 minuts.left on the clock, Montpellier had a series of penalties, they had refused the penalties at goal and gone for at least the draw, but each time it did not happen and finally in the79th minut. they took their chance and Garbisi stroked another penalty through the sticks giving the boys a very well deserved second half bonus point, 27-23 was the final score, a fright for Bordeaux and a relief for Montpellier, who deserved something out of the game after a sterling second half performance. Martin Devergie was criticised by the press for kicking the ball out for the end of the game but being 80mts short of the Bordeaux try line where anything could have happened was the right decision, a bonus point away to Bordeaux is always worth securing as not everyone will have that honour.

Final score 27-23, Vincent Guidcelli coming off the bench did everything that was asked of him, which included a couple of great attacking runs with the ball, Thomas Darmon was excellent in defence, the back row did some good work in attack and defence, and the second half did credit to all on the park.

The mistakes in the first half cost Montpellier probably more points than they deserved but it happens, there will be many teams who leave Bordeaux pointless this season.