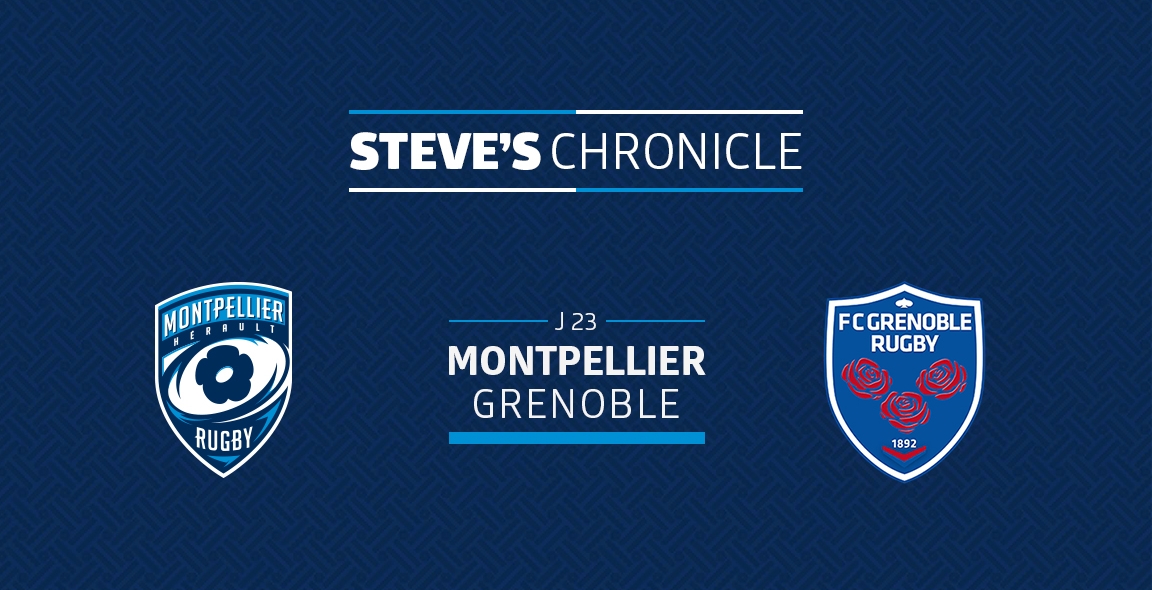 Montpellier still in 9th place but fighting for their lives to qualify for the end of season play-offs, but anything can happen with just 4 games to play, it also depends on what the others contenders do, as they also can come unstuck  if things don’t go to plan. Just 2 home games left, tonight Grenoble are the opposition who are still struggling to survive and play TOP 14 rugby next season and the last home game the weekend of 18/19 May is against Stade Francais also contenders for the top 6 qualification. Aaron Cruden got the game underway back once again from injury hoping that this will be his last niggle of the season and stay injury free. The first twenty minutes saw Grenoble use the ball well, they have nothing to lose and all to gain, so they attacked Montpellier without concession. Montpellier did not have a great first 20 minuts giving away a whole bunch of penalties which gave their goal kicker Latorre 3 chances to score which he did, one excellent kick from his own half and Grenoble had a 0-9 lead, which was not helping Montpellier’s cause.

Captain Louis Picamoles once again took control and after a penalty and the following line out the ball was gathered and with a little help from his forwards he was bundled over the line for Montpellier’s first score of the game, Benoit Paillaugue hit a great conversion attempt from the touch line but it crashed into the upright and stayed out, 9-5 the hosts were back in the game. On the half hour, that man again Latorre converted another penalty from around 55 meters once again Montpellier penalised for a fault on the deck by Kelian Galletier, silly discipline was costing Montpellier dearly, 5-12 to Grenoble. Montpellier were now gaining ground and looking more impressive, a penalty was given and Captain Louis took it quickly, Yacouba Camara received and he gave the ball to Gaby Ngandebe, who flew Concord style down his wing, nobody would catch him, when he accelerates its very impressive and under the sticks he went, La Paille converted and all was level 12 apiece. Finally the ref blew for the break with no further scores, Montpellier still had plenty to do if they were to get maximum points from this game, but the second half they would have the wind behind them which will certainly help their cause.

The second half got underway and Montpellier had taken their medicine, which gave them a completely new turn to the game, they started in earnest and playing some excellent rugby, the Grenoble defence started to yield and the tries came fast and furious. Captain Louis got his second, then Levan Chilachava who is not often on the scoreboard, Jimmy Nagusa followed a classic wingers try from the flying Fijian, Paul Willemse with his usual force and power and finally Youri Delhommel who crashed over from a 5 meters lineout, another of Montpellier’s youngsters who came off the bench and had a fine performance, all were converted by La Paille bar the last try of Youri’s which Aaron Cruden took charge. Yellow cards were distributed to Julien Bardy and Lazar are a quick bout of fisty cuffs, but great to see Julien back into the fire after his long lay off from injury, and he may well play a massive part in the two remaining matches away from home games against Castres and Clermont. Final score Montpellier 47 Grenoble 12.

The second half was a pleasure to watch, the final 5 minuts saw Montpellier defending on their try line but withstanding all the pressure thrown at them, even though the score was 7 tries to 0 and the game well won, they defended with guile and spirit, this is what character, leadership, and pure effort to create a group prepared to fight to the bitter end whatever the score is never ever give up. Complements all round for a team which played as one and played for each other, again the youngsters, Enzo Sanga, Daniel Brennan, Gaby Ngandebe, Youri Delhommel, Momo Haouas and finally Arthur Vincent all played their part, given the chance these guys will go a long way if they work hard and keep their heads down. Three games left Castres away, Stade Francais at home, and then finally Clermont away, all very tough games but if qualification is desired, all three may have to be won a very tough call, but how much is this wanted, the group is solid and anything can be done if the boys want it that badly. A special mention for Didier Sanchez who has had a couple of forward and scrum sessions with the boys over the last couple of weeks, an “old school” scrum dictator of years gone by, but still spot on with the modern game, and the results were for all to see on the park.  “Merci Didier” Roll on next week and Castres, we are on a roll of self belief can we upset Castres, YES I believe we can !!!