A VICTORY FOR THE FORWARDS 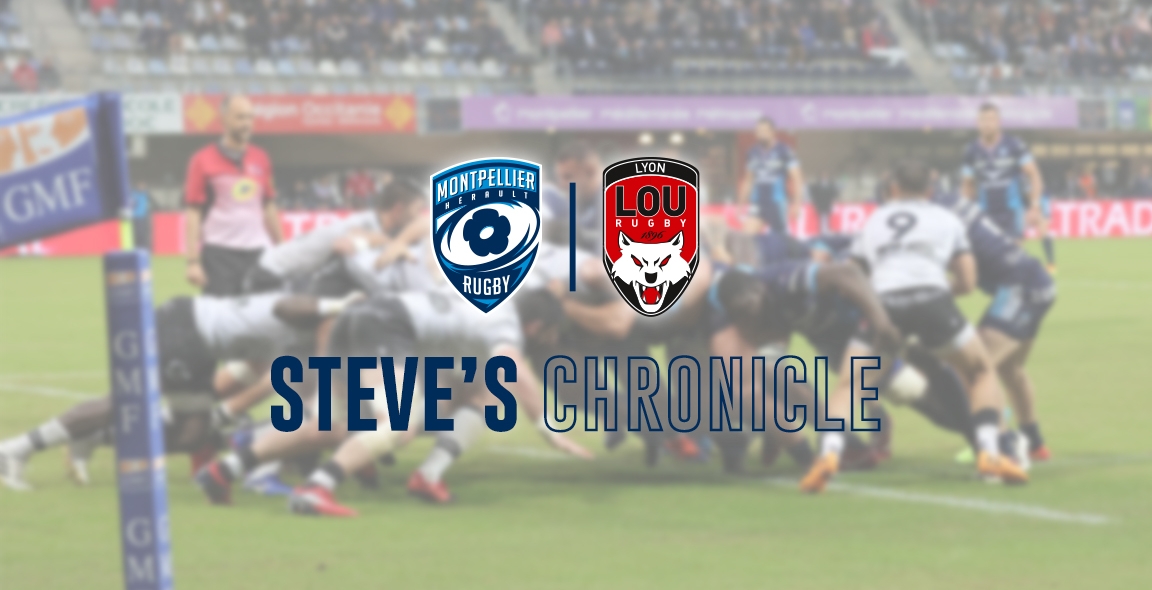 The weather was not good, warnings everywhere in the Herault and Gard for massive storms during Sat and Sun, but does that worry the pro rugby man of course not, they play in moreorless any weather including today’s, where the rain poured for the full 80 minuts.

This weekend the visitors were Lyon who has been knocking on the door for the last couple of seasons, wanting to take on all the big boys either home or away, so the utmost respect must be given to them.

Montpellier did not seem to care to much about the weather but the Wolves of Lyon were a little more timid and their ball control and infringement count in the first 20 minuts was way too high and they were punished by Referee Romaine Poite accordingly.

There was a meagre crowd present of around 8,000 but that was down to the bad weather, the game started and first on the score board was a Paolo Garbisi penalty after only 4mins. Pelissie equalled the score for Lyon 3 - 3, Handré Pollard hit a superb penalty from his own half to move the score onto 6 - 3, but Garbisi did exactly the same in the 14th minuts.  the ref was awarding penalties for very school boy errors from Lyon and at one point had to explain the line out numbers as they were confusing themselves, or they were still learning to count, whatever it was it was to the benefit of Montpellier.

The Montpellier forwards were dominating this game, more physical and with plenty of aggression they outplayed the opposition and ball stealing was a game they won hands down every time they moved forward they made plenty of ground, before opening up the ball for the three quarters but with the rain streaming down handling was always going to be an issue for both teams.

In the 26th minut. the forwards again battered the Lyon try line and again the faults appeared from Lyon, finally Mon. Poite lost his patience and awarded a penalty try, he also used his yellow card twice and Lyon were down to 13 on the park, the score moving nicely forward to 16 - 3.

The errors continued for Lyon and in the 35th min. Sopoaga standing in his own try line received the pass from his scrum half after winning the 5mts scrum, he dropped the ball, Cobus Reinach like lighting advanced and dived onto the freebie, he thought he scored the ref was not sure so the video was called and the result, the ref blew for the try, Sopoaga first start for Lyon not the best!!

Finally the ref blew for the break and Montpellier had a comfortable lead 20 - 3 but this game was far from over both teams were happy to take the 15 minuts. break as conditions were getting worse.

The second half got underway and it was all Montpellier the forwards rucked and spoiled with excellence, most of the time Lyon were clutching at thin air, the only words the stadium could hear was Pierre Mignoni shouted TACKLE TACKLE sure the players knew this, probably something they learned at the École de Rugby many years ago, but Pierre Mignoni did insisted that maybe they were not sure if it was necessary in a game of rugby!!

Geoffrey Doumayrou got himself over the line but could not ground the ball, a good effort all the same, but this time he was denied by the video ref, shortly afterwards another penalty try for Montpellier, Gela Aprasidze darted forward and chip kicked towards the line, he was obstructed by Niniashvili, the ref went to the video and it was clear to see, the Lyon winger got a yellow and Montpellier a penalty try, an all Georgian affair so there will be no International scandals hopefully, this moved the score onto 30 - 3 and also the attacking bonus pt.

Five mins. before the end of the game Doussain went over for Lyon, Montpellier lost their bonus point but the match was well and truly won 30 - 8. Mon Romain Poite continued to issue yellow cards, 2 for Montpellier and one for Lyon but it would not change the match and finally he blew for full time the score 30 - 8, an excellent win for Montpellier, shame about the bonus point but winning is the most important and that was done with some great work by the forwards.

Sebastien Chalureau is an excellent replacement for Paul Willemse when on International duty, and he was the obvious choice for Man of the Match, but he was aided by the other 7 forwards on the park whether they started or came off the bench later on in the game.

With this win Montpellier have moved into 4th place in the TOP 14 jumping over Lyon.

Next week the boys are in Paris v Stade Francais and then a break until the end of November. because of the Autumn Internationals, so the next game after Stade Francais will be at home on the 27th November Vs. Castres Olympique, the arch old enemy who we love to beat.