WHAT A DIFFERENCE A WEEK MAKES 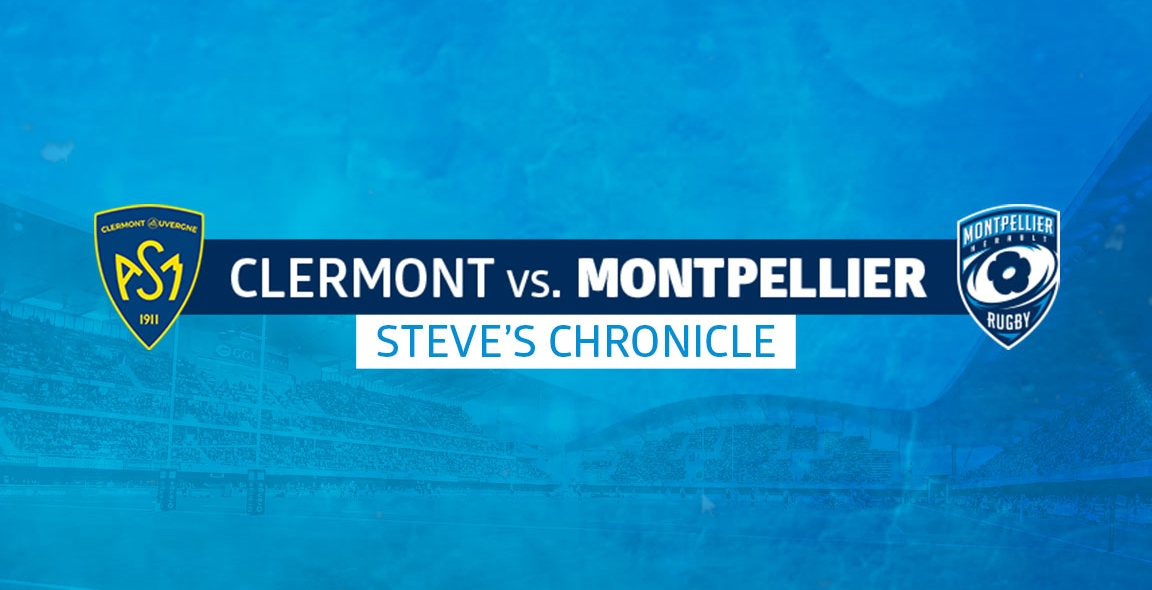 A defeat in the last minute at home against Bordeaux last week gives no one the confidence needed to pick themselves off the floor and come out fighting, but it had to be done if Montpellier were not to see another serious set back. The adversary this week was Clermont and playing out of their skin at the moment, so in points of difficulty it was not many out of 10 given to Montpellier to succeed. The only thing to their advantage was in the past few years Montpellier had had tremendous success in Clermont let’s hope this continues. After his success on his debut last week Louis Foursans was again selected to play at No.10, and on the bench returns for Louis Picamoles, Benoit Paillaugue, Jacques Du Plessis and Nicolaas Janse Van Rensburg, also welcome to Olivier Azam as the new forwards coach, if anyone can rekindle the fire in the forwards it is Olivier, known for his straight forward no messing approach, while his fiery playing days often gave the fear of God into many an opposition, plus he has had plenty of experience with PSA. either playing or coaching, on PSA’s coaching staff.

The game got underway and Montpellier had their defence in place from the off, Clermont have been scoring on average 4 tries per match so this was not going to be easy for the boys, but every attack that Clermont threw at their opponents Montpellier stood tall and kept them out, they even took the lead with a couple of penalties from Prince Louis. (Louis Picamoles had the nickname of King Louis when he was at Northampton so new boy on the block is christened Prince Louis)

The first half was mainly Clermont with the ball, but Montpellier were evident in the rucks, scrums, and line outs winning plenty of ball and even having a few steals, with some good work from their forwards they managed to get a few penalties especially when the pressure was on.

When the whistle went for half time, it was 5 penalties to 2 the score being 6 - 15 to Montpellier.

The second half started and again it was much the same as the first, a forward battle and watertight defences, both teams had a fair amount of small errors due to the near freezing temps. But Montpellier stood firm with some excellent tackling and out of defence kicking. Once again the penalty mark was in favour of Montpellier and with Prince Louis in great form with the boot, he slotted another 2 in the second half, he did miss one but it was from 50 minutes. and on target but just short with 10 mins. to go probably fatigue in the very young legs of his.

At certain very important moments, there were steals in the line out from Capt. Ouedraogo and Camara, and when King Louis entered from the bench 2 very good steals in the rucks, one right on our very own 5mts line. The score had moved on to 15-21 with 10mins to go, now that final 10mins was going to be so important for Montpellier, they have lost 3/4 games this season in the last few mins. of the game could they turn the tables and keep Clermont from scoring a converted try and winning this game. With great guts and little glory they knocked down anything and everything that moved forward towards them, nobody gave an inch, which was frustrating the home opposition who made a bucketful of mistakes.

Finally the siren sounded and Montpellier were the winners 15-21 all the points for Prince Louis, rarely have I ever seen the coaching and medical staff jump so high with joy, it was more relief than anything else, they had survived the on slaught and come out victors no mean feat against a very good team.

Man of the match was obviously Prince Louis Foursans for his kicking game, total points scorer and at this tender young age, showing an old head on some very young shoulders, but he was not the only player to shine the front eight were excellent and the backs defended like demonized devils.

There looked to be an awfully large input from Olivier Azam, he has obviously worked hard with his forwards in so little time he has been with the club, hopefully this could be the stepping stone that propels the club on the right track, and as far as fighting spirit goes this game went to Montpellier hook line and sinker. Credit must also go to Xavier Garbajosa and his coaching staff he celebrated his 44th birthday this weekend and the boys gave him a massive confidence boosting pressie.

This could be the start of the new Montpellier everyone is hoping so, there is a long way to go but they have to start somewhere and why not this weekend with the victory away from home Clermont !