The win and the defence positive, but the rest? 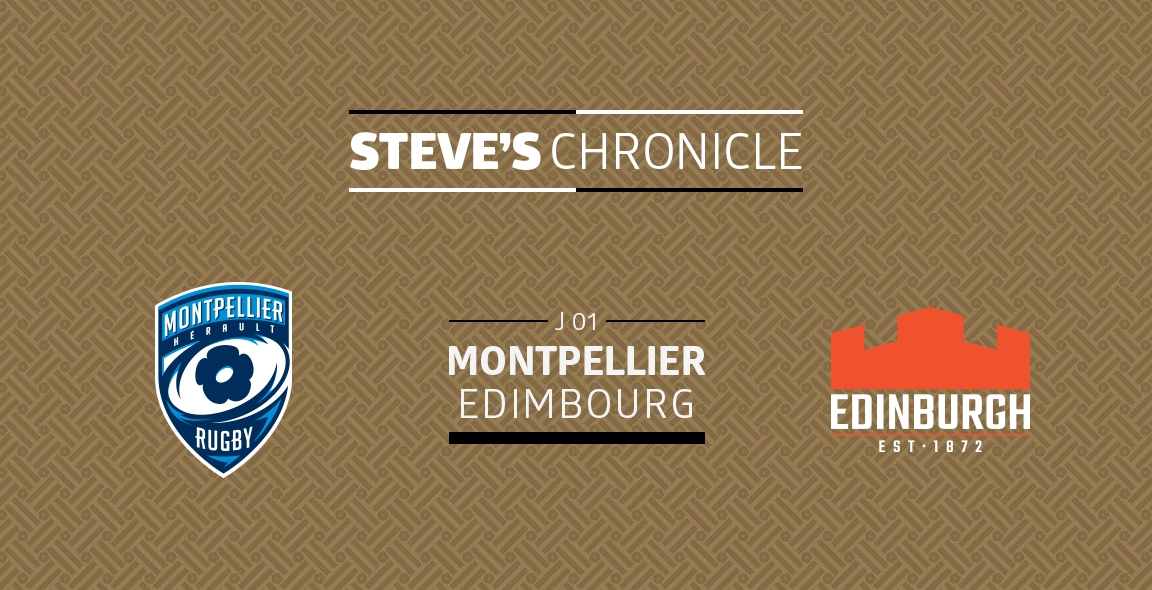 First Euro Champions game of the season : the visitors Edimburgh. This was their first Champions Cup for several seasons. We have learnt in the past that any British team coming to France for the Champions or Challenge Cup games will always be looking for points and upsetting the locals.

This is probably the only time that the 100 Year War is continued. They will be aggressive and fight tooth and nail, to come out winners, and things do not change when France and the Brits meet on a rugby park. The Montpellier staff will have good knowledge of the Scots as Vern Cotter and some of his staff spent 3 seasons in charge of the National team, and in terms of Internationals on the park today, Edimbourgh, fielded 20 of the 23 on the team sheet, either 15 or 7 aside Internationals. The honour for the man in the middle was given to Wayne Barnes, a World class referee who normally does a very good job as he also makes the effort to speak French to the boys which also helps, unlike some who stick to their native tongue.

The match started with a strong wind helping Montpellier and it did not take long to get themselves on the scoreboard, a neat sidestep by Ruan Pienaar and then the prefect pass to Henry Immelman who went over, the extra were added by Pienaar himself and Montpellier were 7-0 to the good. This game was far from all Montpellier as every time the visitors had the ball they made ground and created many problems for the Montpellier defence, and it was not long before Edimbourgh got themselves on the score sheet. Hickey attacked the Montpellier defence, the forwards came up just short of the line and finally McInally got himself into the hallowed ground, the extras were added by Hickey 7-7 and all to play for. Although Montpellier were playing reasonably well, the grit and guile of the Scots was evident, and they were going to battle for everything to the very end small scraps become banquets. In the 31st min. Benjamin Fall scored an excellent try, after the ball went out from Pienaar towards the wing with a long miss pass Benjy got the ball and still had plenty of work to do. He beat 2 defenders to go over not far from the corner, an excellent conversion by Pienaar for the extras 14-7 to the hosts. Just before half time Montpellier got their 3rd try, a break from Nico Van Rensburg, then Pienaar who kicked high and towards the wing of Gaby N'Gandebe. He jumped high for a guy who is not that tall gathered well and scampered over near the sticks, again Pienaar added the extras 21-7 and the break was there, another try in the second half would assure the attacking bonus point. Hickey converted a penalty on the stroke of half time for the visitors. The half time score was Montpellier 21 Edimbourgh 10

The second half got under way and the game changed completely, the visitors kept the ball for long periods of time with Montpellier having to do an awful lot of defending, and for reasons unknown to man or beast they seemed to fall into some sort of Rip Van Winkle slumber, and only some last minute ditch tackling saved their souls from several possible scores. Bismarck got himself 10mins in the bin as the Ref was beginning to lose his patience with the home team as not much was going to plan and endless mistakes were gifting the visitors with everything they could wish for. Edimbourgh did score a further try through Fife in the 58th min. which kept them well in the game. The conversion was missed but the score 21-15 and all to play for with still 20mins. left on the clock. The last 20mins saw Montpellier defend for their lives as Edimburgh had the bit between their teeth and were going all out for the win. Some excellent defending saved Montpellier’s skin but the attack have died a death and was non existent for most of the 2nd half. In the dying minute Louis Picamoles intercepted and charged for the line he was held up a yard short, that would have been the 4th try an the bonus point but it was not to be, finally the ref blew for the end of the game and to be very honest Montpellier were very lucky to hold on to their 6pts lead, two tries disallowed for Edimbourgh and not a single point scored in the 2nd half, there will have to be words and some very hard work in the next 8 days before the  match way from home v Newcastle Falcons, if Montpellier went to gain a quarter final place later in the Euro Champions season.

A very disappointing performance from Montpellier, yes the win was gained but it should have so much more, 0pts in the second half and much of the 40mins was spent defending, 173 tackles v 59 for Edimbourgh Louis Picamoles did receive the Man of the Match award and he deserved it for his role as Captain and leader, nearly pulling of the 4th try and bonus point win. Next week heads down, silence, and hard work to produce a win away at Newcastle, this hopefuly will put a smile back on Vern’s face.